We came to Alaska for the Kichatna Spires, lured by a dream of El Capitan sized walls set on remote glaciers. Living on the wall with a week of supplies, onsighting finger cracks on a steep headwall under a midnight sun. 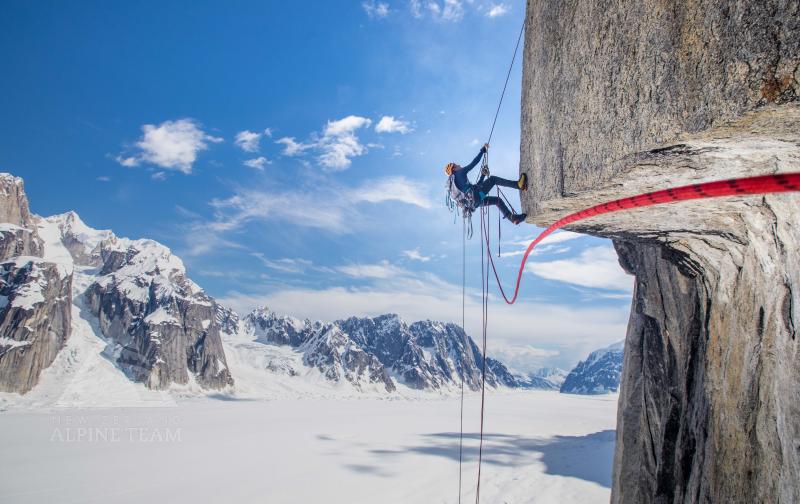 But the Kichatna’s reputation for abysmal weather held true. After four days sifting in Talkeetna waiting for the elusive flying window our patience ran dry. Time running out, we hatched a new plan.

An hour later Paul Roderick of Talkeetna Air Taxi was flying us into the Ruth Gorge. Our eyes lit up as the huge granite faces filled the windows of our small Otter ski plane. Mount Barrill, and the famed Cobra Pillar appeared. Almost 1000 metres of steep, featured granite, capped with snow, and plenty of potential for a new line.

We arrived midday and the weather was perfect, so we went straight to work. As two teams of two we would alternate twelve hour shifts to continuously push our ropes up the wall, capitalising on the eternal daylight of a high Alaskan summer.

Dan Joll and Kim Ladiges packed sleds for every eventuality and set off to quest up a new line on the face right of Cobra Pillar. Meanwhile, John Price and I established our glacier basecamp.

With John’s telephoto lense we watched our friends inch up the first pitches. By the time our paths crossed on the glacier around 3AM, the haul bag of supplies was already hanging a respectable 120m up the wall.

John & I jumared the fixed rope and racked up for an intimidating warm up: a wet, arching off width crack.

Above, heinous crozzly rock kept us on edge. After dawn, the heat of the sun warmed snow patches on the summit sending slough avalanches cascading down the face unnervingly close to our side. We continued with trepidation, but I was eventually shut down by a disgusting corner, fused with a miserable excuse for granite.

On the next shift, Kim managed to pass this crux with an M7 lock-off, utilizing the rear hook of our piton hammer. But the atrocious rock tired him also, so by the mantra of his mentor Twid Turner, only one word echoed through Kim’s head: “Penji, penji, penji!” (*Translation: pendulum.) 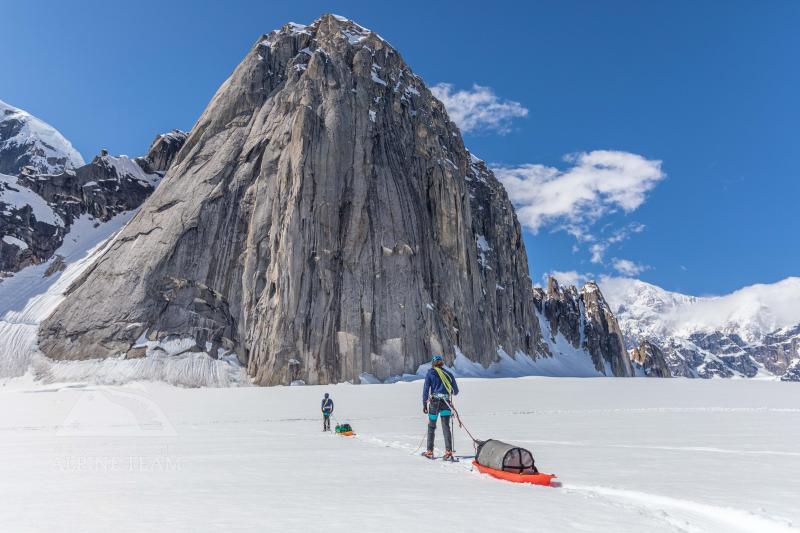 So Kim aborted ship and swung off into a new crack system far to the left. Twelve hours, two pitches. This was proving hard work.

But we had now fixed into a potential nook to set up our first portaledge camp, so the following day John & I laboriously hauled up 7 days of supplies into the alcove.

Meanwhile back in basecamp, Dan & Kim watched in horror as a rare slough ripped from the top of the mountain, plunging directly towards John & I at the belay.

I looked up to see a river of wet snow crashing through the rock arch we hoped would protect us. I pressed my body close to the rock. Snow slush poured over us, soaking us to the bone. With relief the torrent subsided, fortunately without any chunks of rock or ice. A close call.

The radio crackled in my chest pocket; it was Dan.

“Good… I think we can tolerate the bad rock. But now that our line seems to still be in the firing line, we’re not keen on the overhead hazard.”

I scooped more snow out of my jacket hood.

That day it took ten hours to haul, and five hours to descend, as we navigated a maze of steep and traversing abseils with 80kg haul bags dangling from our harnesses.

After four day of effort it was back to the drawing board, plus, we needed a rest. The everlasting daylight was playing havoc on our body clocks.

Between servings of bacon grease and whipped cream coffee, it became apparent the only sliver of The Mountain relatively safe from avalanche was the central prow, which we believed to host the classic Cobra Pillar route.

In our haste leaving Talkeetna, we had only one vague photo of the face showing lines, no names, no topo, leaving the rest to speculation… 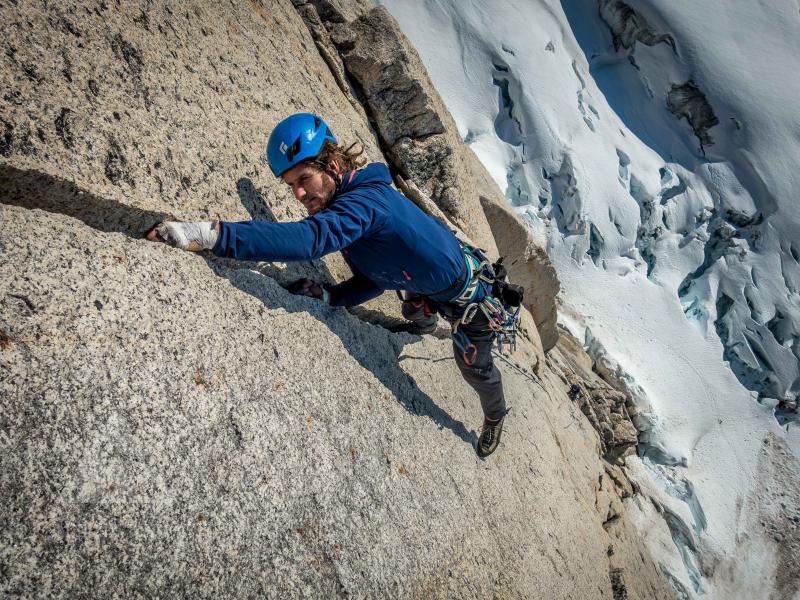 Determined to climb quality virgin terrain rather than crawling up an existing route in a slow big wall style, we restarted questing up corners hoping to link into mega cracks firing up the buttress. John started leading up our proposed line and discovered a multitude of fixed gear low on the route with fun 5.10 climbing, confirming that we must have started up the Cobra.

So from a major cave low down, we branched out to the right: Kim spied a thin face climbing traverse to access a new crack system. From a strenuous knee-bar, he laboriously hand drilled a bolt and was able to crimp his way across the steep wall.

Upon reaching into a wide crack and looking upwards, he could not believe what he had discovered. Pitch after pitch of continuous splitter, offwidth.

Five and six inch wide crack rocketed straight up the proudest part of the prow. Kim was in heaven. He led out mega pitches of glorious heel-toes and butterfly jams, as good as anything in Tasmania. It was some of the highest quality climbing any of us had ever encountered in the mountains.

Adding to the delight they discovered a set of ledges to set up camp. The following day we worked together as four to haul up heavy loads and establish our main portaledge camp 350m up the wall. We were now poised for the upper pillar.

But that evening, a sickness that had been nagging John suddenly exacerbated, requiring a late night evacuation mission. Fortunately our five ropes strung together just reached the glacier, and John was able to fly back to town the following day.

With Kim & Dan exhausted from their all-nighter saving John, I took over the lead for the day. And so followed the ‘pecker piton pitch’ described above, which proved to be one of the most intense memories engraved in my mind from the wall.

I gained new appreciation of how it feels to discover brilliant climbing in its raw, natural state.

With the help of my friends’ wisdom, I was able to unearth incredible hand cracks, finger cracks, stemming corners and roofs, ridding them of their dangerous blocks and loose gravel, hammer and wire brush on hand. 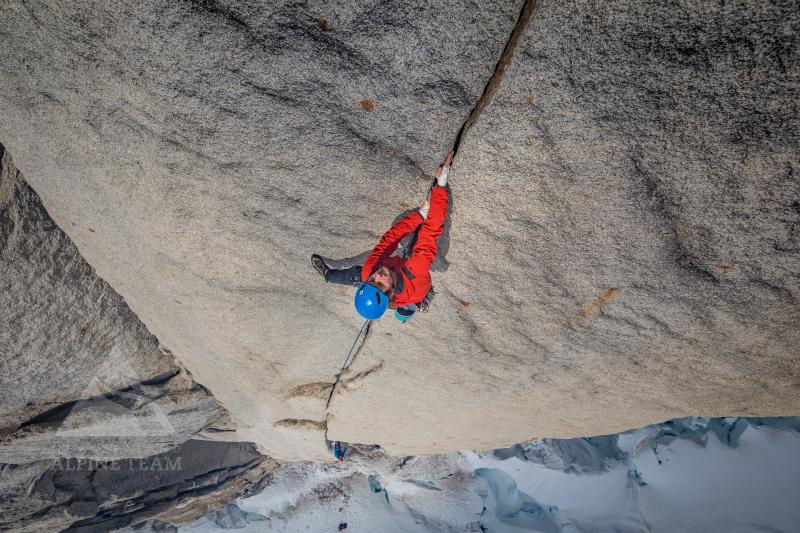 The thought that this might become a real classic spurred us on in our mission. Having climbed in many of the popular granite climbing zones, we genuinely thought this route contained some of the best alpine rock climbing in the world. Where else do you find 15 sustained pitches of 5.10-5.11 crack climbing stacked on top of each other, in the mountains, where each one in its own right would be a crag classic?

Ropes fixed high, it was finally time for a push to the summit. Above, we rejoined the Cobra Pillar route with its sensational arching splitter to crest the pillar. We stripped down into alpine mode and began simul climbing more moderate ground.

Or so we thought. Kim lead through increasingly wet cracks, drenched by melt from the summit’s still heavy and unstable snowpack. Our worst fears were confirmed: we were too early in the season to safely reach the summit. 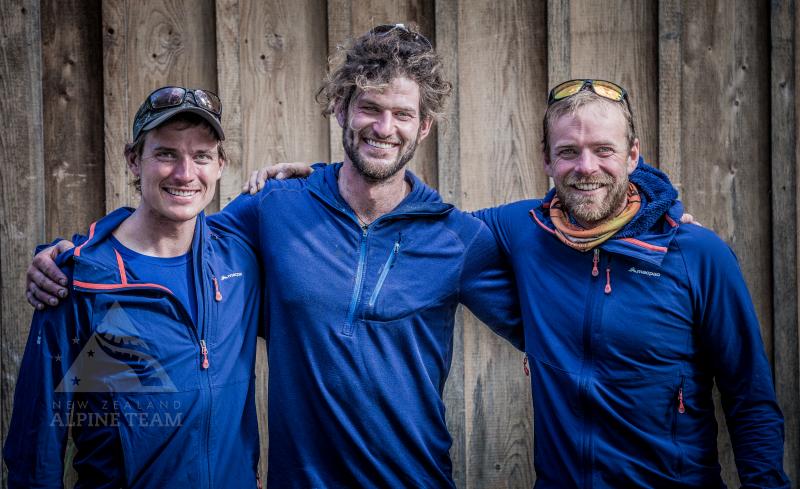 Team shot back in Talkeetna

Nearing the final technical pitch, the quantity of snow lying above become painfully apparent. It threatened to release at any moment.

The decision to descend was sore but simple; there was just two hundred metres of moderate, yet dangerous, terrain between us and the summit. As mountaineers we all heartily crave to stand on top, but will also quickly turn back when the conditions dictate otherwise.

We arrived back at portaledge camp around 5AM to find our precious Radix meals ravaged by ravens, powdered spinach and berries strewn across the rocks. The carnage back down at glacier camp was equally atrocious.

Fortunately, our own Raven of Denali was already in full flight, ready to pluck us from our glacial squalor, and back to the living world. 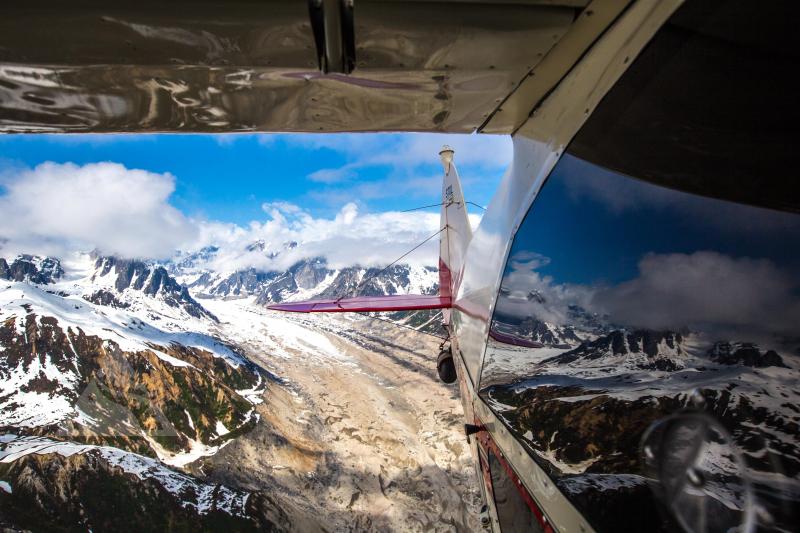 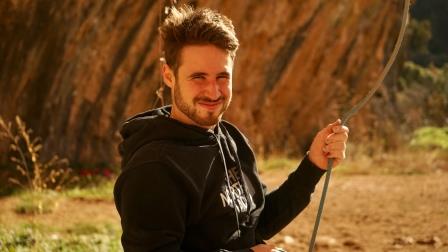 My way to 9a or losing is also winning Previous 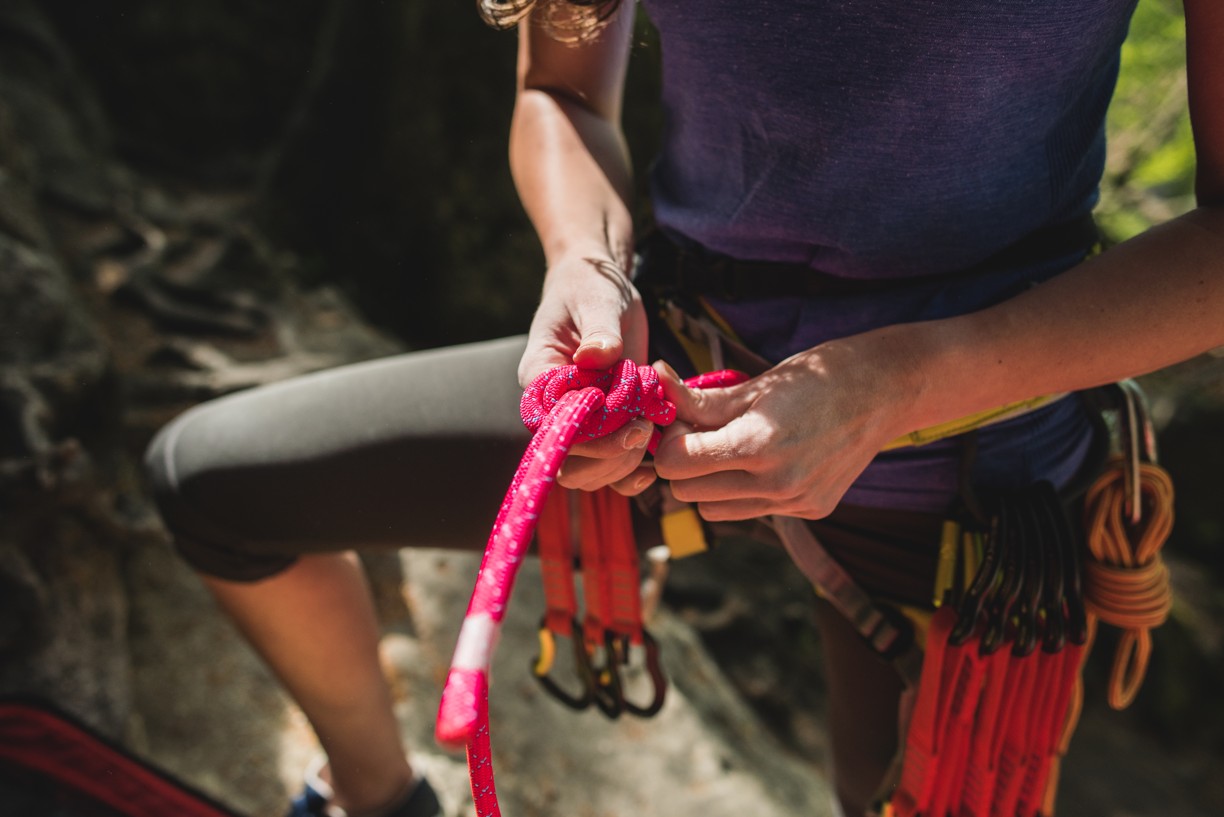 How to choose a sport climbing rope