How many meters of a polyamide fibre can possibly be in, let’s say, a 60-meter rope? Hundreds? It could even be kilometres, I was thinking when I was walking (with my back hunched so that I wouldn’t get too entangled in the manufacturing process) under the stream of thin, almost see-through veins lit by fluorescent lamps which were running above my head. Before my visit to Silesian village of Bolatice, a small municipality approximately halfway from Ostrava to Opava, ended, my question was answered. Eventually, this idea led to a nice mathematical-untangling exercise, which kept Víťa, one of the developers, fully occupied for about ten minutes. But let’s start at the beginning.

First, I wondered whether there is still anything new to develop as far as the climbing ropes go – if there are still lands to explore. Víťa certainly thinks so. For example, as for the ropes’ durability, there is always something to improve. And Víťa succeeded in this regard with the new Master PRO 7.6 double ropes. Though it was a bit of an accident. You see, at first, he was trying to develop the thinnest single rope possible. However – as Víťa explains – developing a rope isn’t like writing a computer program, where you can immediately see the results of your work. “It’s more like playing with it, really. Because with textile in general and ropes in particular, adding or removing material never works as you expected.” To me, the description of the whole process sounds more like alchemy – by adding or removing this or that substance you aim for finding the precious harmony between the core and the sheath. “You add more material to the sheath and think that the rope must logically withstand more falls. But it doesn’t work like that. Even if you add material, the number of falls may still decrease,” says Víťa, showing me the harsh truth about the development process.

So, are there many dead ends in the development of ropes? “Yeah, loads! And the worst of all is how long it all takes. Making a sample can take two weeks. And then you bring it to the testing lab and the falls come out all wrong.” Which means starting from the scratch – on the office chair in front of a computer where Víťa launches the SAP software, creates a new project and makes a list of material. Then he assigns the tasks of twisting and shrinking the polyamide fibres according to his ideas. The manufacturing takes place in several halls of the huge LANEX facility in Bolatice. Later he collects the resuls of his colleagues’ work and takes them to the rope braiding workshop, where, based on the new procedure, he makes a new sample by himself. Will it work this time? 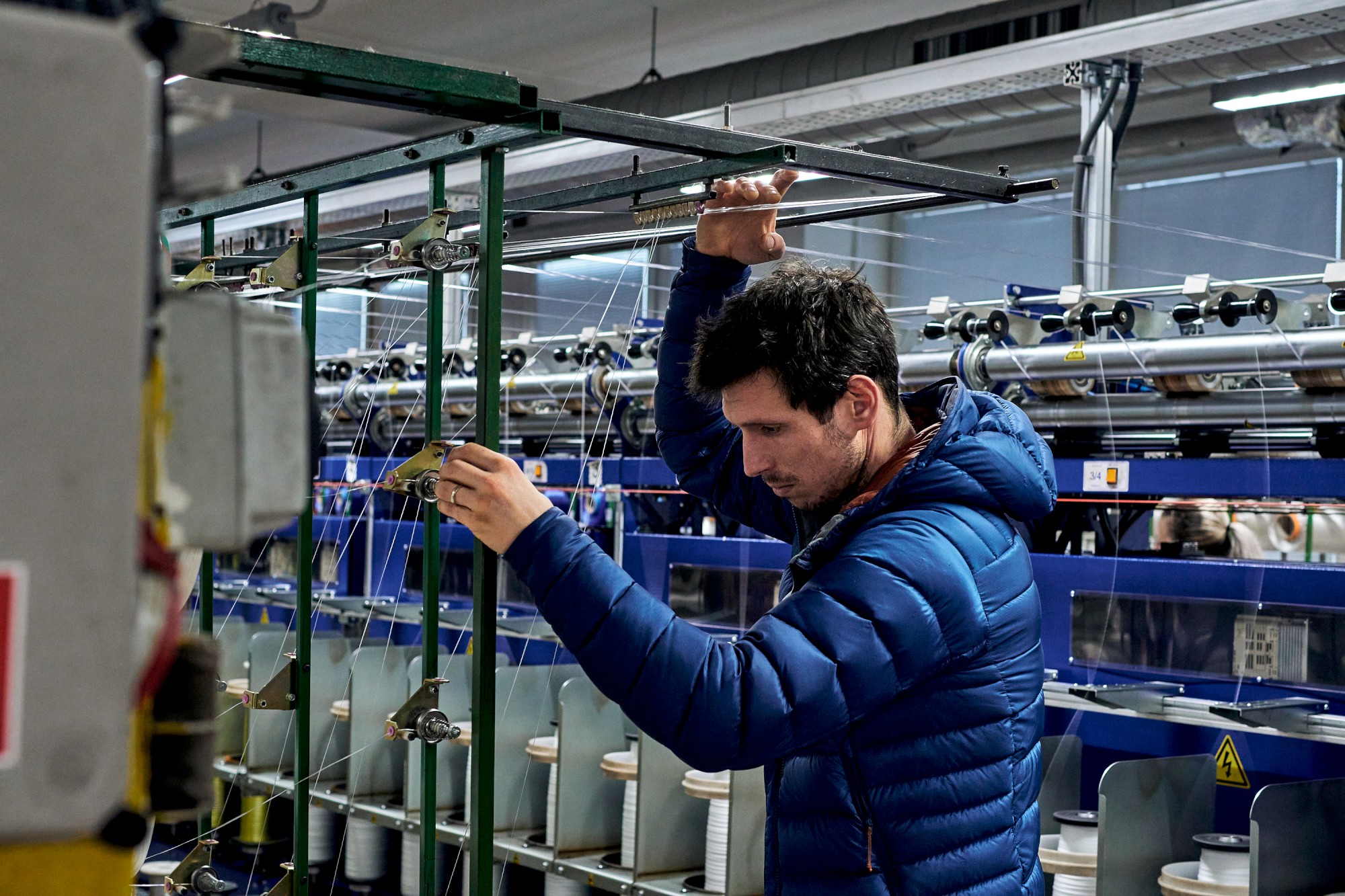 The developer Víťa is checking the twisting process

At the third attempt to make the thinnest single rope possible Víťa discovered that he inadvertently found a perfect half rope. “There is no other half rope in the whole world that would have a less than 8 mm in diameter, and which would at the same time withstand more than ten falls. And, as a bit of a bonus, the “handling” – that is, how it feels when you hold it – is perfect, too. Which is another dimension that Víťa is trying to explore and improve. “But this is the final phase of the development process. Depending on how much you tighten the sheath the rope becomes harder or softer,” he explains, reaching for a piece of a mottled green rope on a shelf above his desk. “Right now, I’m playing with twists. This rope is a bit harder, but it withstands some pretty crazy stuff.” So, one day it may become a perfect choice for sandstone climbers. Nevertheless, this particular piece still has to wait for a while until it’s introduced to an everyday climbing life. Right now, the development process is not over yet, and most importantly: after the series of tests carried out in your own testing lab and in an independent accredited testing lab authorized to award certificates there are many months of using the ropes outdoors.

And during the summer and winter in the mountains the half ropes developed by Víťa proved to endure a lot. Adam Kaniak, the member of Slovakian representation team climbed one hundred and twenty winter pitches on them, then he was using them in Chamonix in summer and when the ropes came back to Bolatice they were just a bit fuzzy. “He said he wouldn’t mind continuing to climb on them,” Víťa says. And other climbers: Ján Smoleň, Petr „Pjotr“ Vícha, Jirka „Django“ Jaroň and Radek „Zoban“ Lienerth give the developed ropes hard time, too, and then they return them and give us thorough feedback. 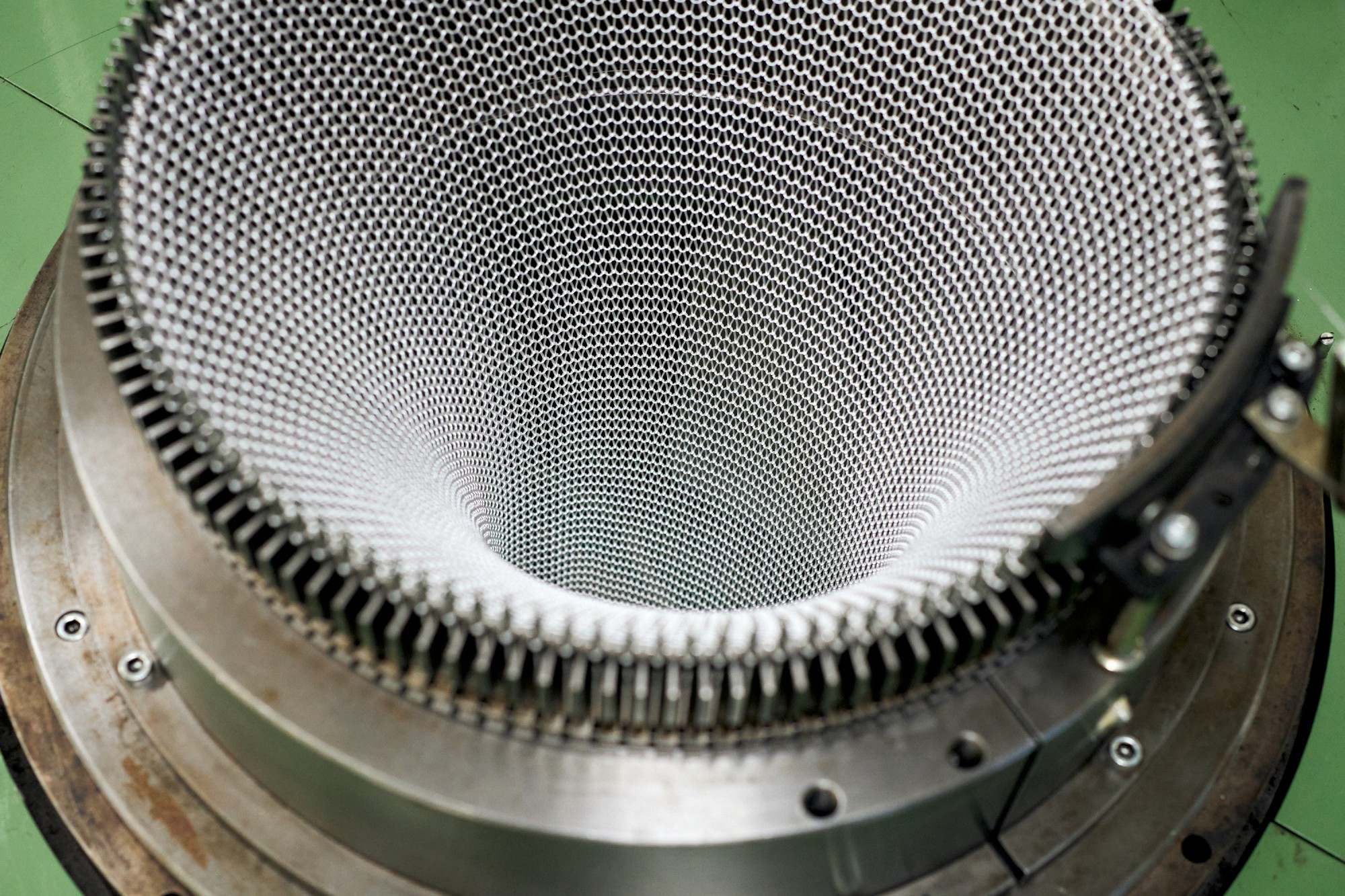 COMPETITION IN A RING BINDER

The part of the development process is also careful observation of the competition’s products. “We see that everyone is dealing with the same issues. For example, you make a nice soft rope, but the sheath wears off quickly,” Víťa explains, grabbing a heavy ring binder full of cut samples of other brands of ropes. “Or sheath slippage – everyone has trouble with that.” In Bolatice this issue was addressed with a specially developed TeFIX® “gluing” technology and the SECURE system, where the core of the rope is surrounded by another, coarser fibre which prevents braid displacement purely by means of friction. “Anyway, you should always alternate one end of the rope on which you are climbing with the other to prevent sheath slippage and twisting of rope,” advises Víťa.

And what should an ideal rope look like? “It would have 9,8 millimetres in diameter but the same weight as a half rope,” Petr, another developer, joins our discussion. “But this can’t be done with current materials.” The weight-reducing trend seems to have hit the limits lately. The weight cannot further decrease significantly, at least until a new revolutionary fibre which could replace the current extruded polyamide is found, or until some kind of a visionary finds a different way of working with the material. “All the rope manufacturers use the fibres made from the same material,” says Petr, and he adds that there is only a limited number of polyamide suppliers in Europe. So, your rope performance is determined mostly by the manufacturer’s production process – such as the method of shrinking or finishing. 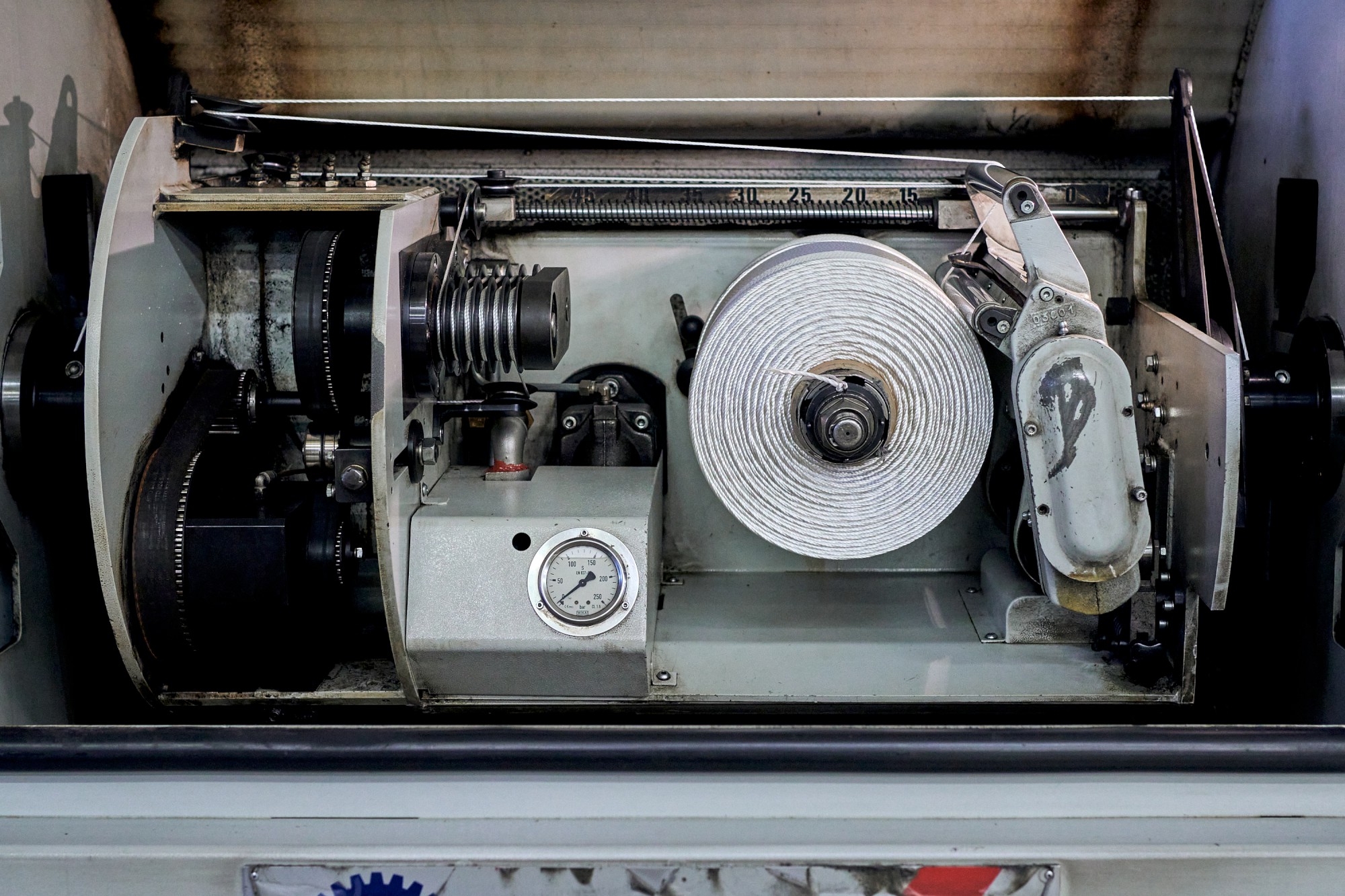 Braiding fibres for the rope’s core

Well, shrinking is kind of a mystical process which has a great impact on the final properties of the rope. Here in Bolatice shrinking is done in a room that is a bit similar to a garage. Outside, in front of rolling doors, there are large paper boxes with braided fibers, and their labels "to autoclave" and "after autoclave" suggest that there may be some kind of an automobile inside. However, the autoclave looks more like a submarine. In fact, it is a kind of a huge pressure cooker, and the combination of temperature, pressure and humidity in it determines what kind of rope will be eventually made from the fibers. If you mess the alchemy up, then it may be the one that breaks in the third fall - and you can start over.

The testing lab is right next door. And the tested ropes undergo huge stress. “The real falls outdoors are nothing compared to the ones simulated in the testing lab,” Petr remarks. And he continues: “In the past, when buying a rope, people were most concerned about the number of falls. Nowadays they understand it better, so no one makes it an issue if a rope has just six falls.” Not even the craziest fall in the rocks does get close to the standardized fall which the rope undergoes during testing. And before it can be sold, the rope must withstand at least five standardized falls. “But still, if I fell from, say, fifteen or twenty meters, I would rather let the rope rest for five minutes,” Víťa says, sharing a more cautious point of view. Thanks to the dynamic elongation the rope stretches during the fall and as long as you hang on it, it stays stretched. And even after the load has been fully removed, it takes the rope a while to return to its original state. 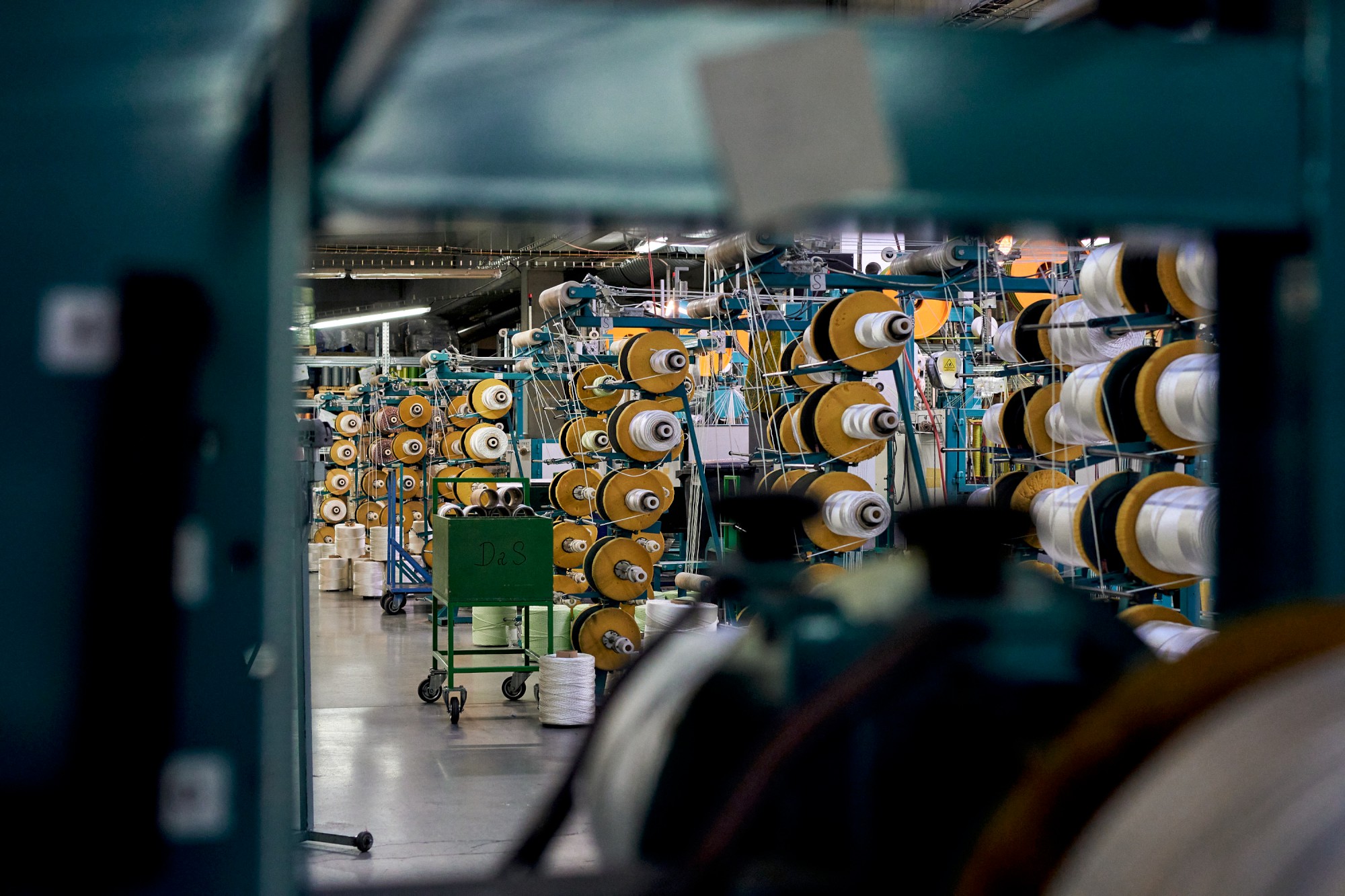 Rope braiding workshop – the place where the ropes are finished

You may say: “A rope? Whatever, it’s just a piece of cord.” But as I can see now, lots of other stuff can be done with such a piece of cord. I may even say: some really fascinating stuff. For example, there is a thin lanyard on Petr’s table, whose length can be adjusted just by pulling, and there is no need of any mechanical parts. He is still working on it, though. "It operates on the principle of friction," says Petr, explaining to me how the splice works with high-strength fibre ropes. And then he removes a textile carabiner from his bunch of keys. Or, more precisely, it is a so-called “soft shackle”, which is used predominantly in yachting, instead of the metal shackles. In any case, the six-millimetre loop from which Petr's textile shackle is made has a higher load capacity than a classic metal carabiner at a lower weight. Of course, you cannot use it for abseiling and there are other limits to its use, too. But maybe there are some other options of using it in real everyday climbing. Anyway, for now this textile carabiner is just Peter’s keychain.

And now, towards the end of the visit, comes the time for the question I came up with while Víťa was guiding me through the manufacturing process: “How many meters of a polyamide fibre is there in the 60-meter TENDON Master 9.7 rope? “ And it’s not just about simple multiplication. Because three braided 1-meter-long fibres will actually be few centimetres shorter than one meter. Anyway, Víťa is very serious about this task and there are moments when he looks like a little boy playing with his model trains. He is cutting, unbraiding, measuring, multiplying, adding up and multiplying again. And the result? There are about 210 meters of fibre in the core and about 221 meters in the sheath. A surprisingly small difference in the amount of material for the bulkier core and thinner sheath is the result of greater weight of the fibre used for core. In total it makes 26 kilometres of extruded polyamide fibre in a 60-meter rope. This is the approximate distance from Bolatice to the centre of Ostrava. Who would say, right? 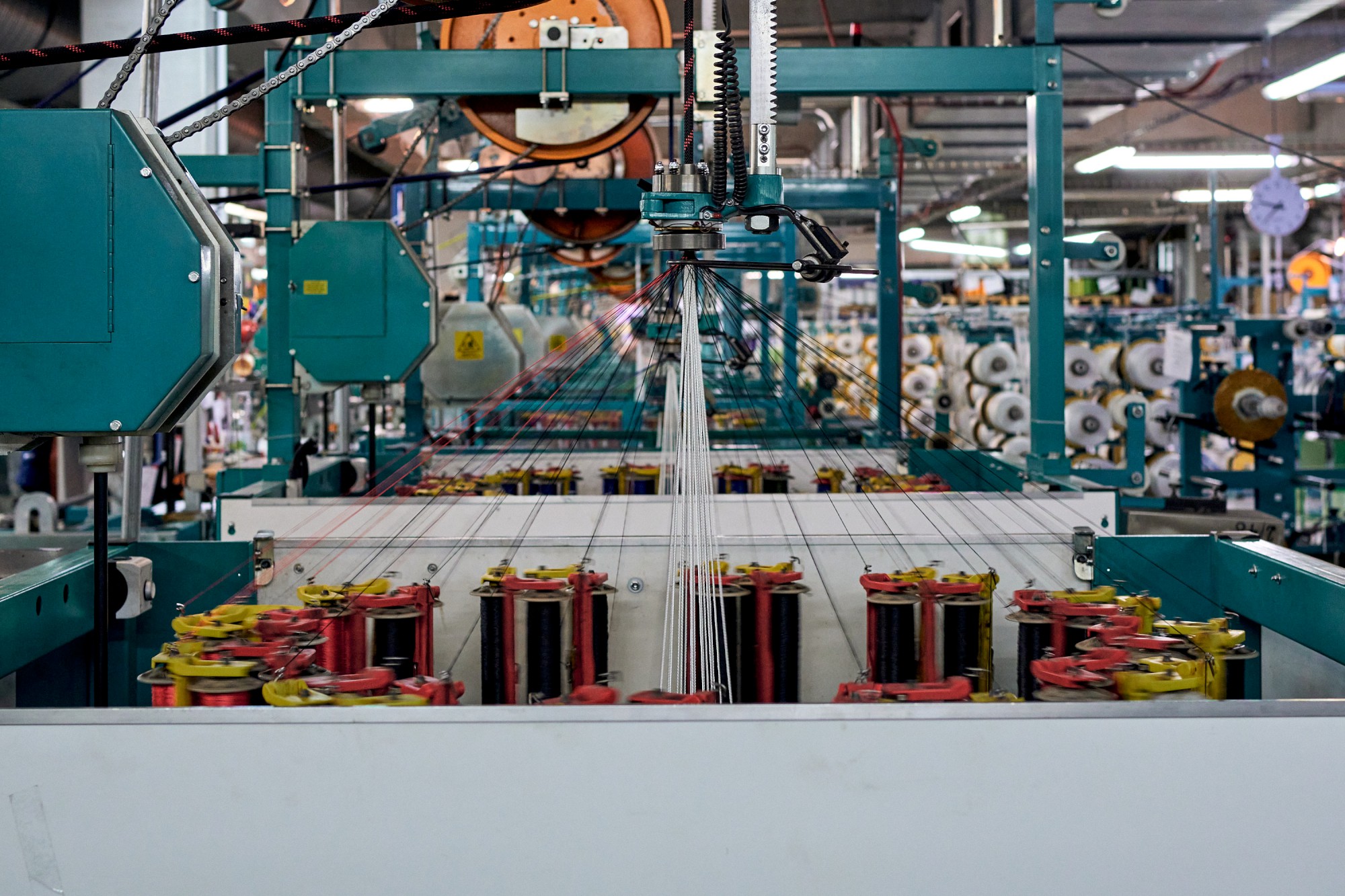 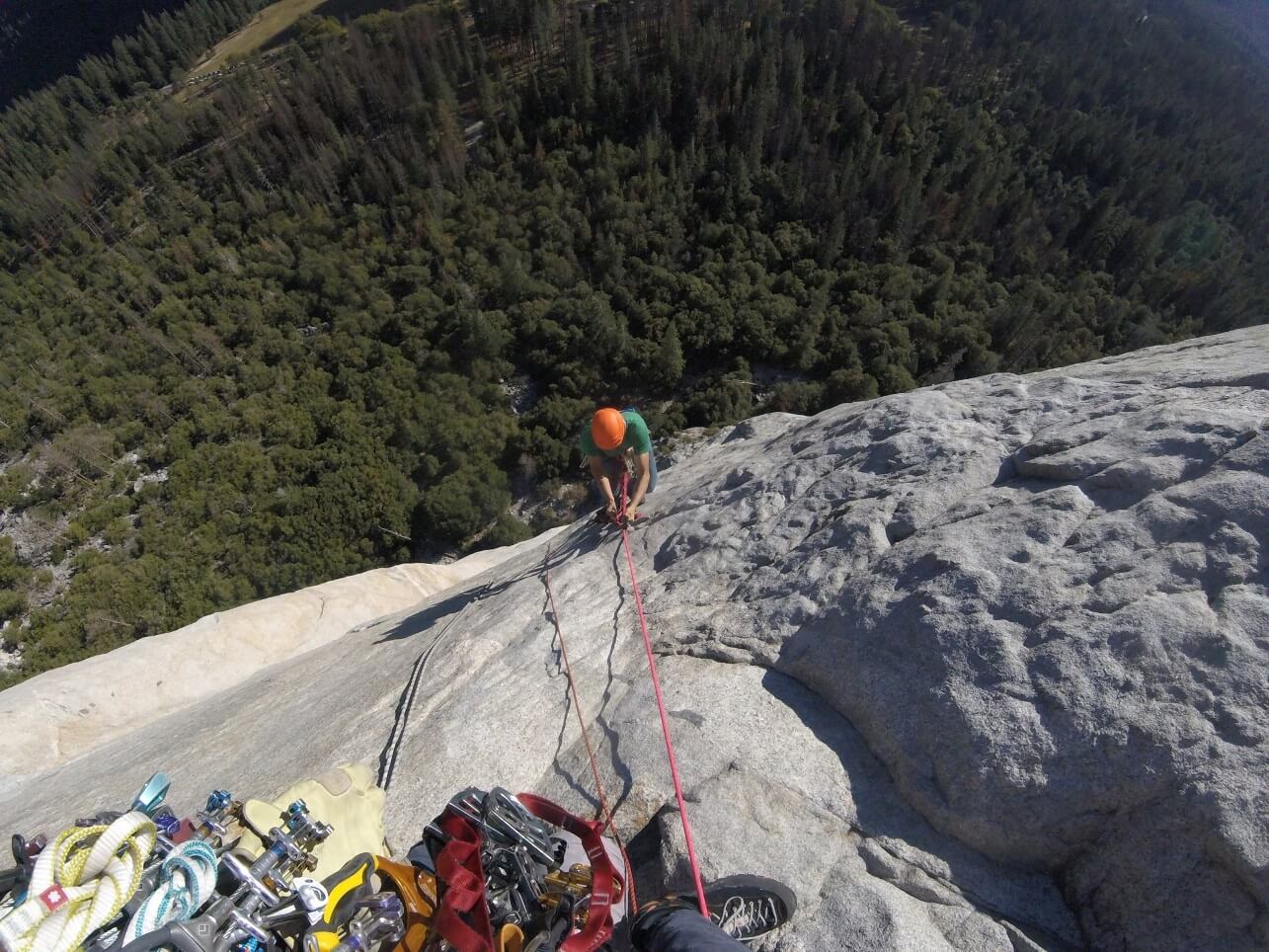