THE SW FACE OF SHISHAPANGMA DENIED US

Geordie pulled out the radio and called the advance base camp.

- Day to summit 4th of October. Wind will be picking up on 5th and at night 10cm of fresh snow. Weather progressively worsening for the following week. 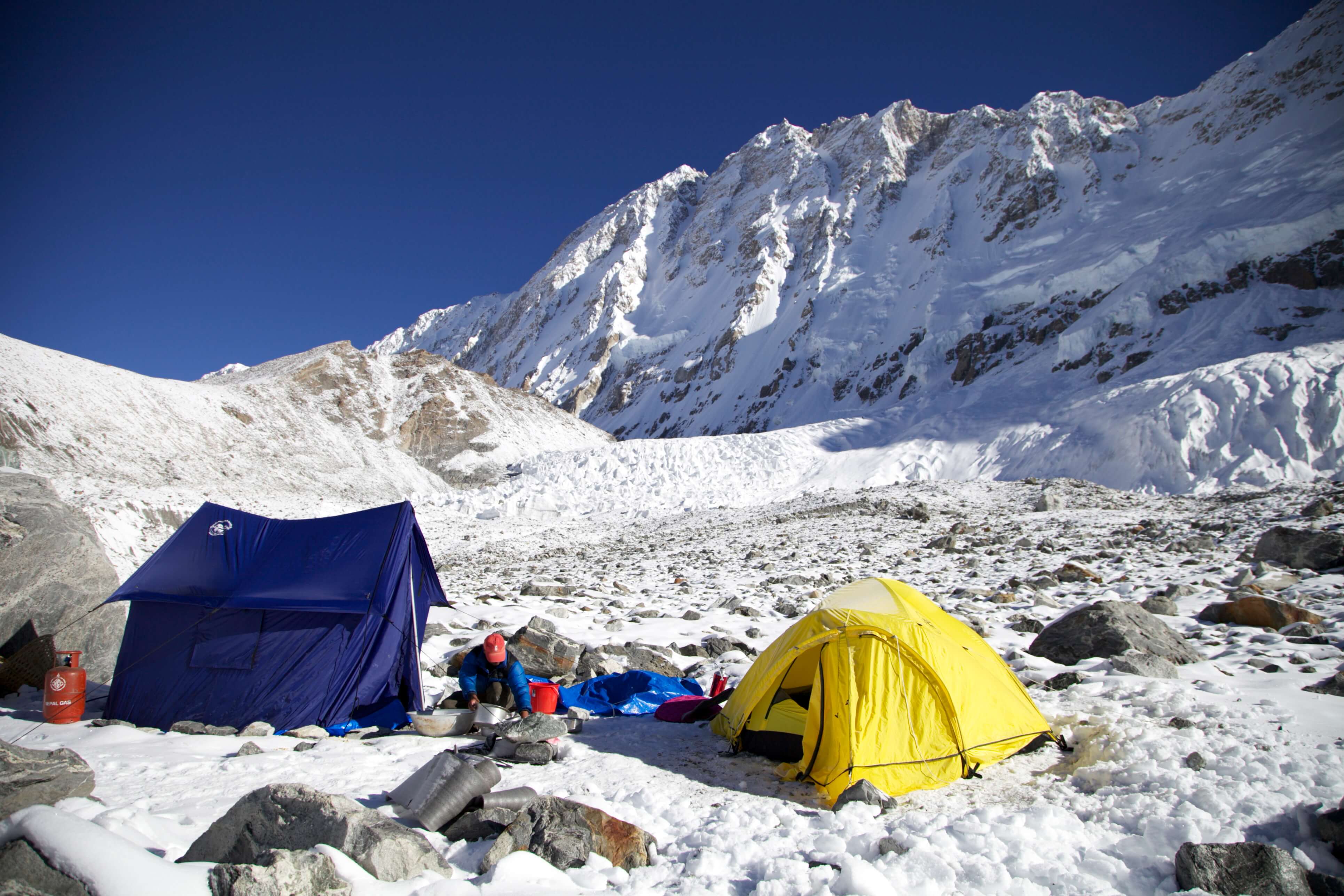 We were on the 4th of October! I looked at my watch and it showed 7200m. I looked at Cristina and Geordie, then I looked upwards. The eyes were trying hard to convince me it wasn’t that far. The brain, however, knew the truth.

- Going down? I asked

Cristina looked at Geordie. Geordie looked at me. Words were coming out hard.

Cristina let a sigh, looked up towards the summit and shook her head.

- If you guys think it’s better, then let’s go down… she said, playing the junior partner. 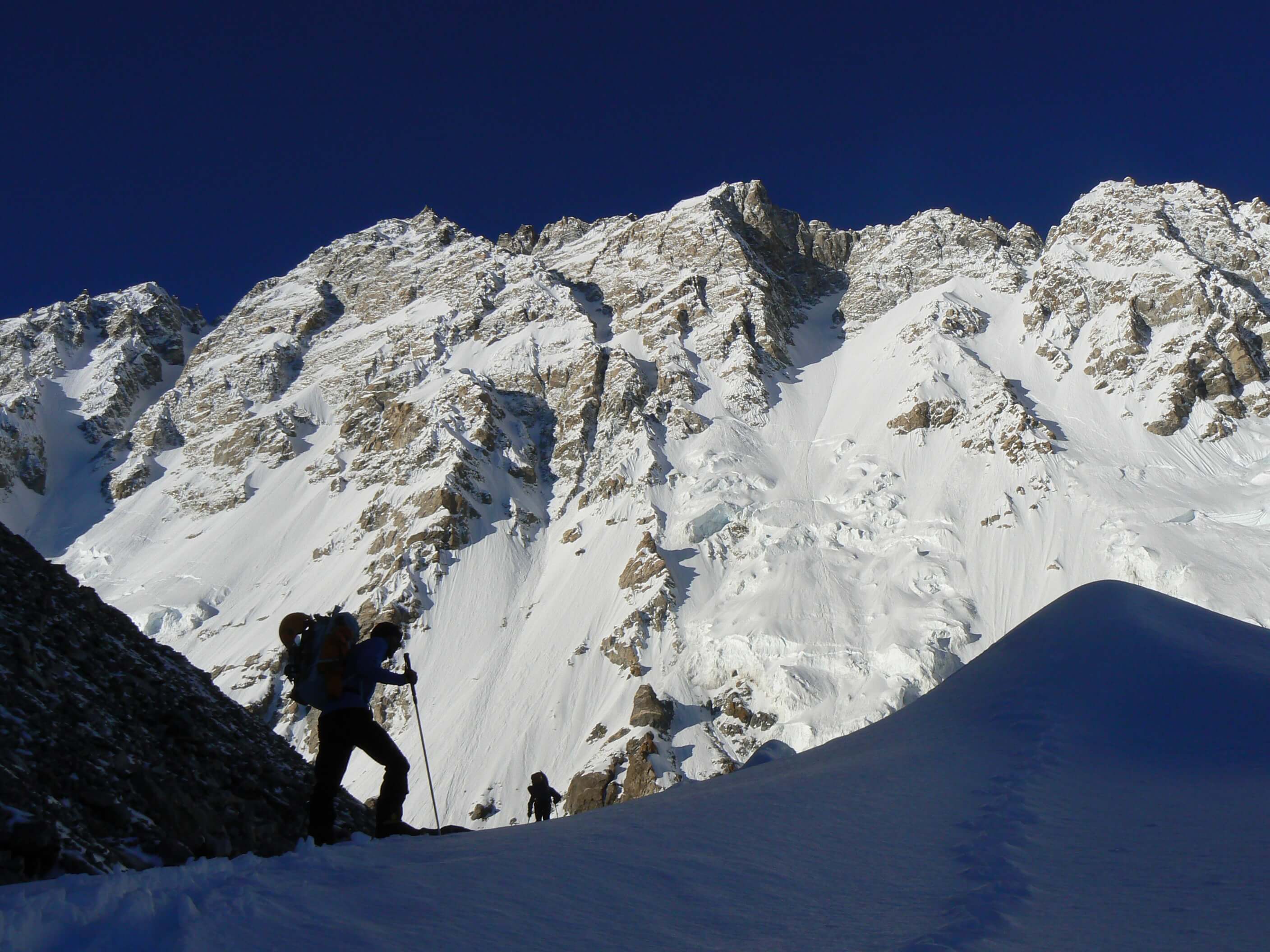 I swear I could see some tears building up in their eyes, or maybe I was looking through mine. We put a sling over a block and I pulled the rope through while Geordie and Cristina were untying. We started abseiling one by one and I felt frustration at how fast we were moving downward as opposed to upward. Didn’t seem fair, somehow.

We got out of the narrows and stopped on the snow slope. I looked across the white face to the right and my stomach tightened suddenly. I knew that going down the same line we came up will take forever and the fastest way off this mountain was to cross the face to the British route. 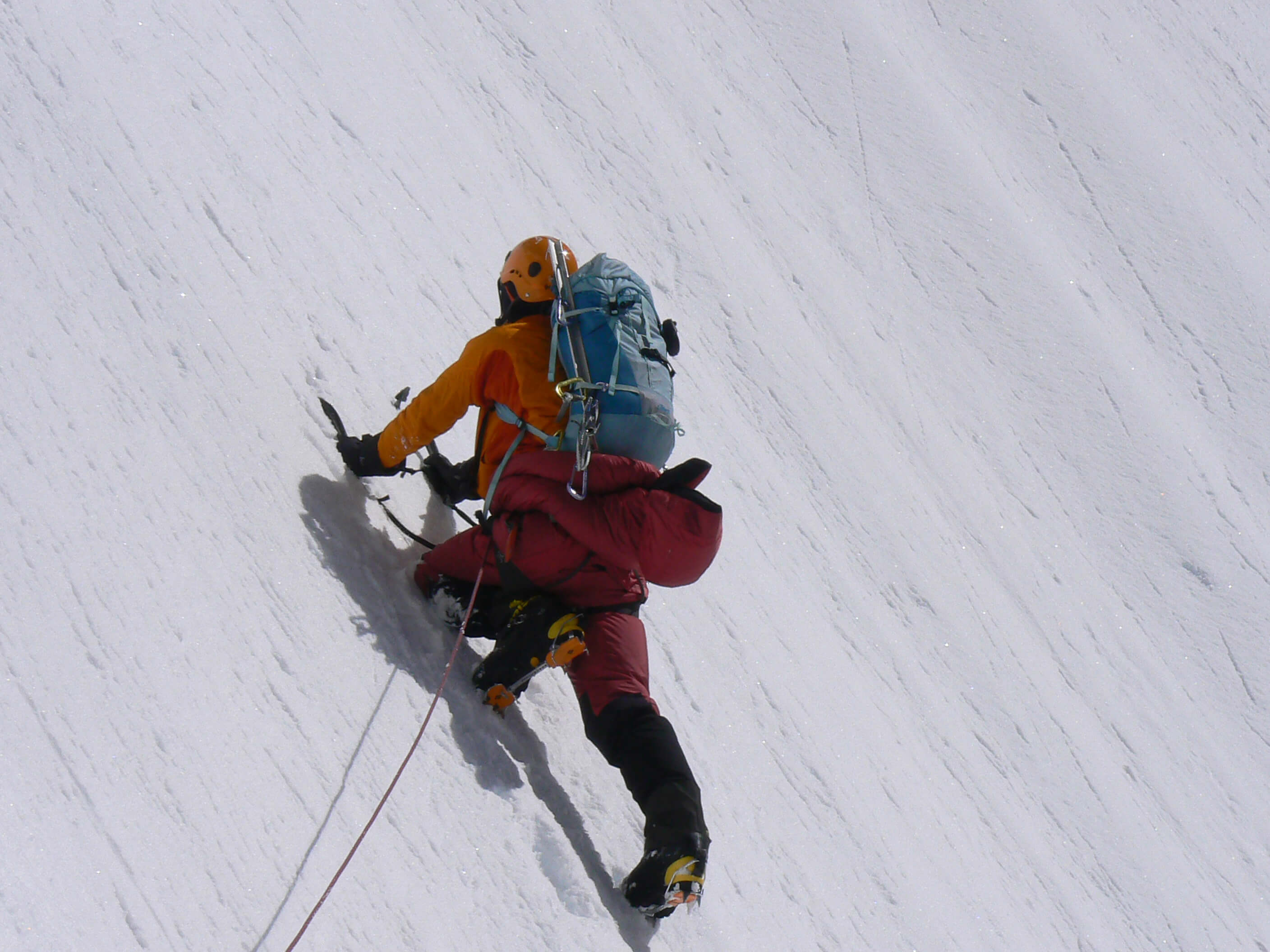 Nevertheless, I could not block out from my mind the sight and sound of avalanches rumbling down the face just a day before. Two weeks ago, we got off Pungpa-Ri few hours before the entire mountain came down in the night during the 18 September earthquake. How long will our luck hold?

The tiny yellow tent visible lower and across was magnetic.

- Let’s try to keep as high as possible and far apart…. 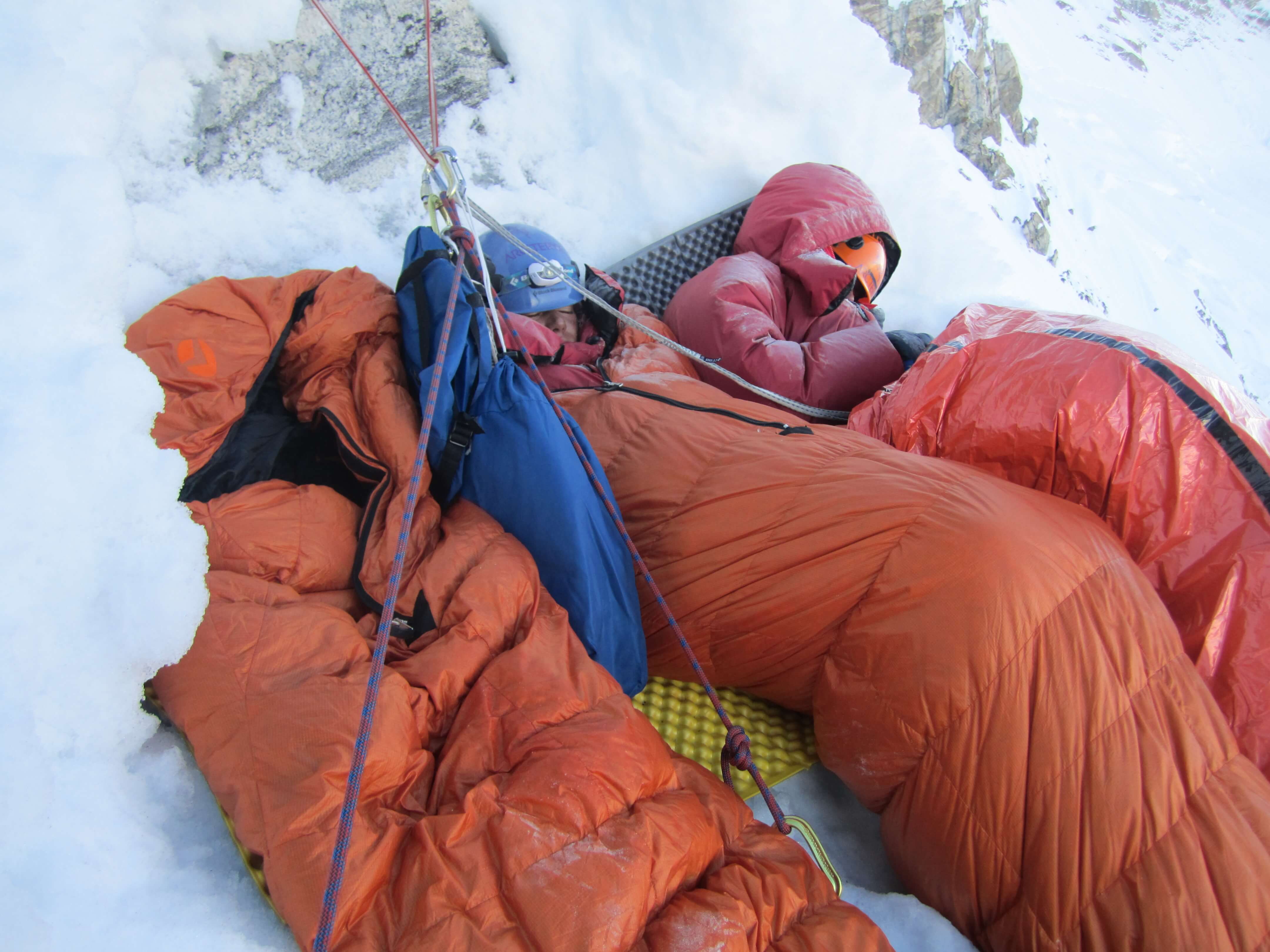 I was surprised at how sure my voice sounded. Geordie was pulling the rope and looked at it as it hung below.

- Who’s carrying this? he asked

- I’ll just drag it behind, I replied. It will be easier and faster than coiling.

He looked at me wanting to say something but maybe felt the energy wasn’t worth wasting. I clipped the rope onto my harness and I stepped across onto the face.

Straight away I thought: What’s the point anyway? After what it felt like an eternity, I stopped under the first big rock outcrop and waited for Geordie to come over. Once he reached me, I clipped the rope onto his harness:

He started moving past me and across the snow face aiming for the next cover. It all seemed now so far away. Cristina was inching her way towards me and Geordie away. It was like clearing a mine field. The pause made me realise how vulnerable we were. And how it all went to bits… 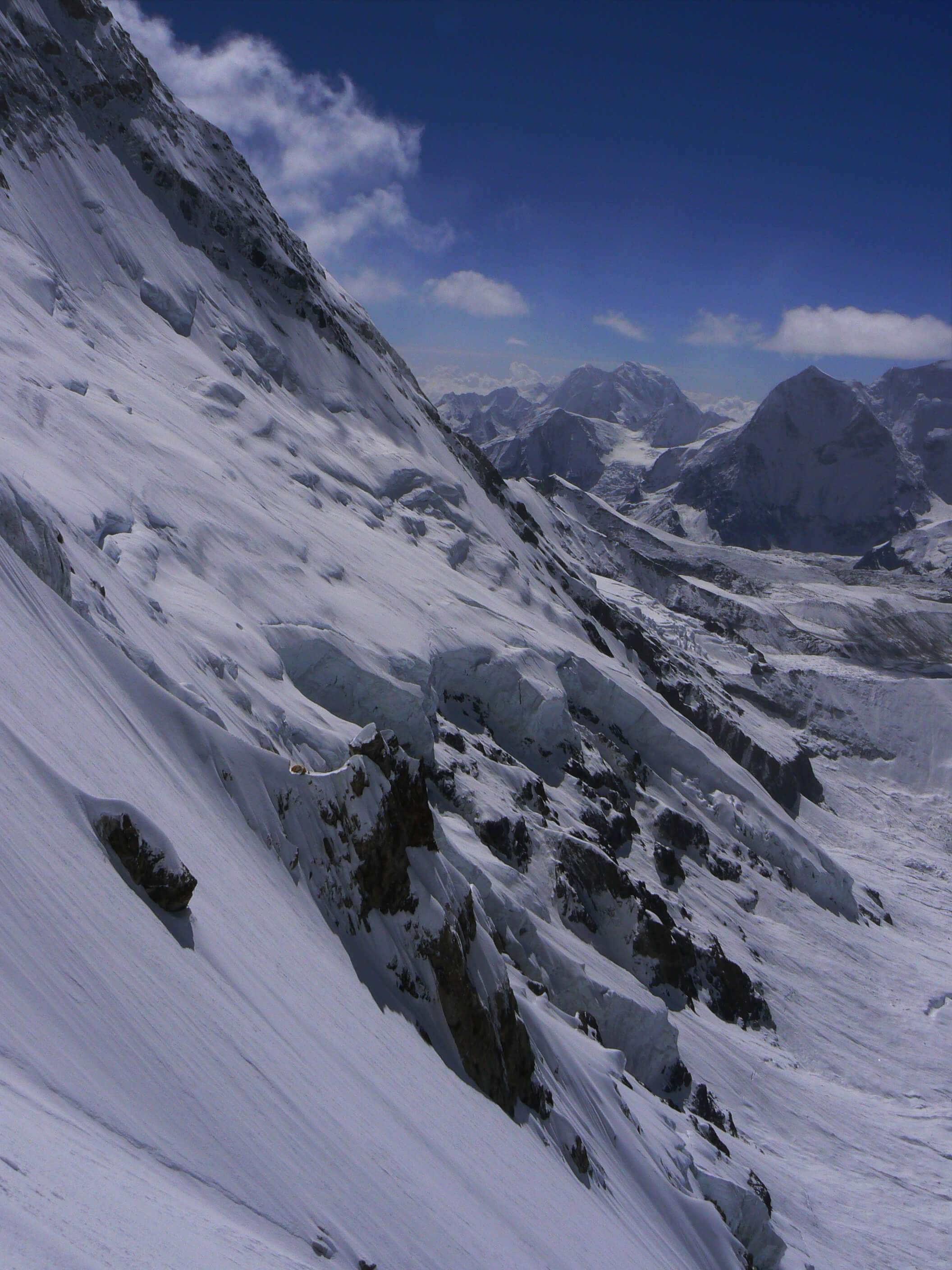 When Andrej Stremfelj and Pavle Kozjek climbed their route, the latter ended up with frozen feet. We planned for such conditions yet we were cooking into our down suits for the last three days. On our first day, after 10am, both sides of the face, right and left the buttress were pouring down with wet snow and rocks. We had to find shelter under a small roof and wait for the night so we could move. We were slow, way too slow. As soon as the sun came out on the second day it felt like trying to climb inside an oven. With down suits rolled down and tied around our waist, climbing was like waltzing close to the passing out line then stop right before it. Three steps at a time. On a huge face. Exhausting. Excruciatingly slow. 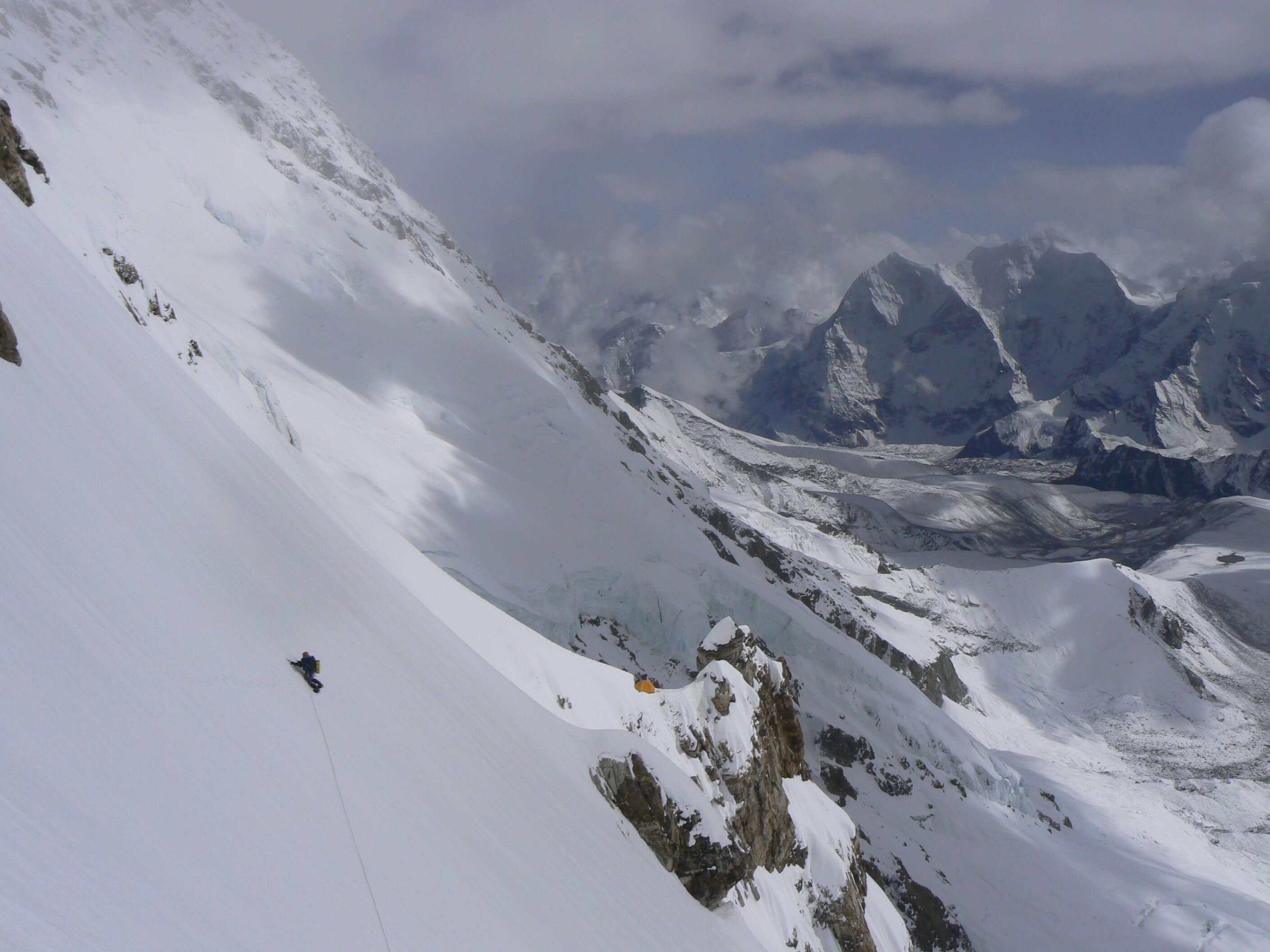 Cristina reached me while Geordie was now just a speck on my right. I started moving, happy I did not have to drag the rope behind me. Small, weird pleasures. Once I reached Geordie on the British route Cristina took off as well. We regrouped and started downclimbing towards the yellow tent the Korean fixing team left. We hunkered in for half an hour, brewing, then got on the move again before it was all getting too tempting. Geordie and Cristina first while I was messing with my crampons. Just as I was about to start going down an avalanche swept down the route and I could only see white powder clouds below me. I screamed down towards Geordie and Cristina being fully aware they were in the direct line. I dashed down hands wrapped on the fixed line and only stopped when I heard them yelling back. Only then I realised how tired I am. The real battle was against falling asleep. Twilight was upon us. We were all zombified. 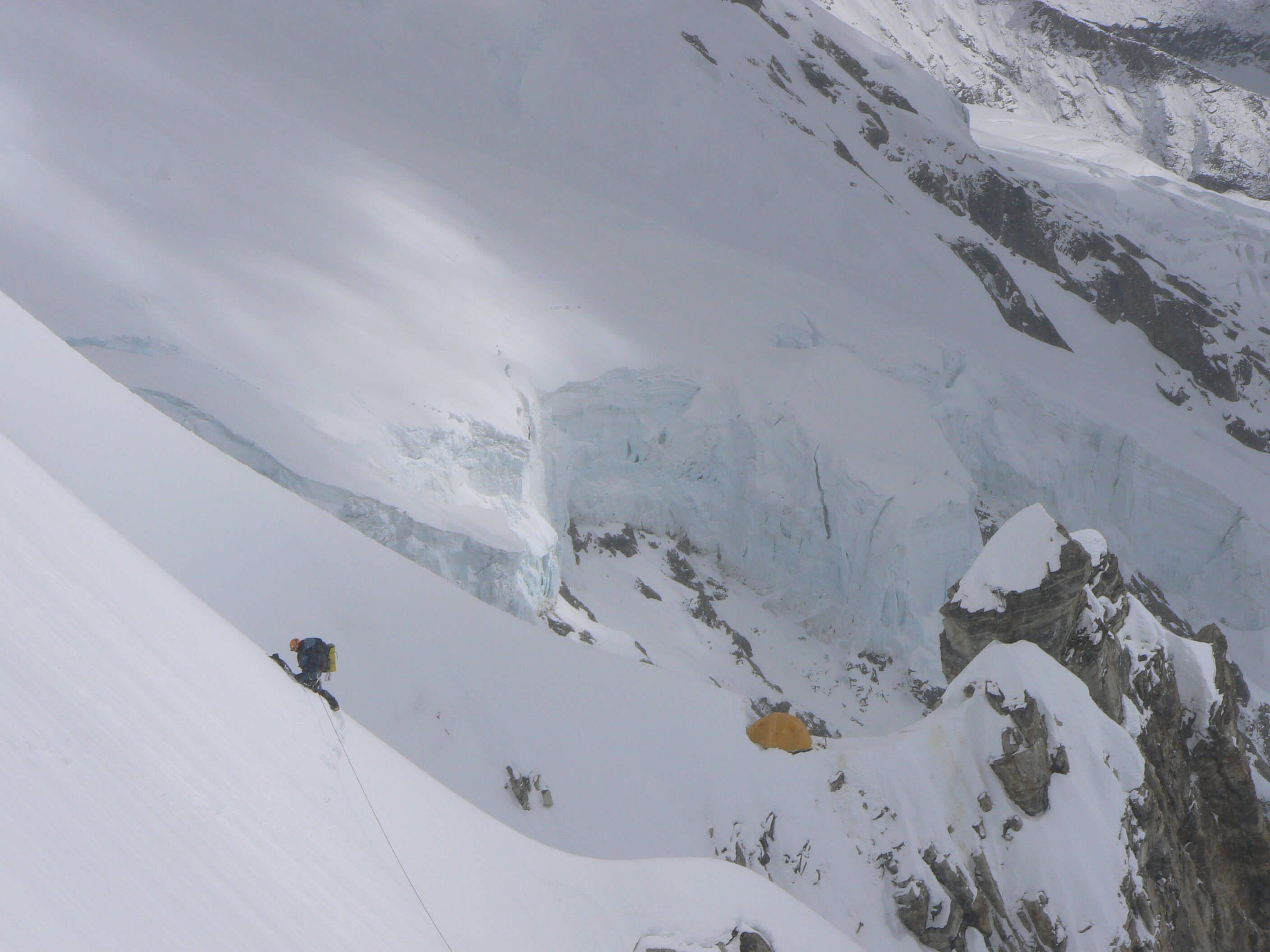 I saw them touch the glacier and shouted to carry on as I will catch up shortly.  Just I didn’t… Instead I briefly had a nap with my forehead on the ice axe. I woke up with a gasp and downclimbed the remaining to the glacier. The beams of their headlamps disappeared between seracs together with the last bit of brightness from mine so I hurried like a hunted animal. At 11 pm we stumbled in the advance base camp. 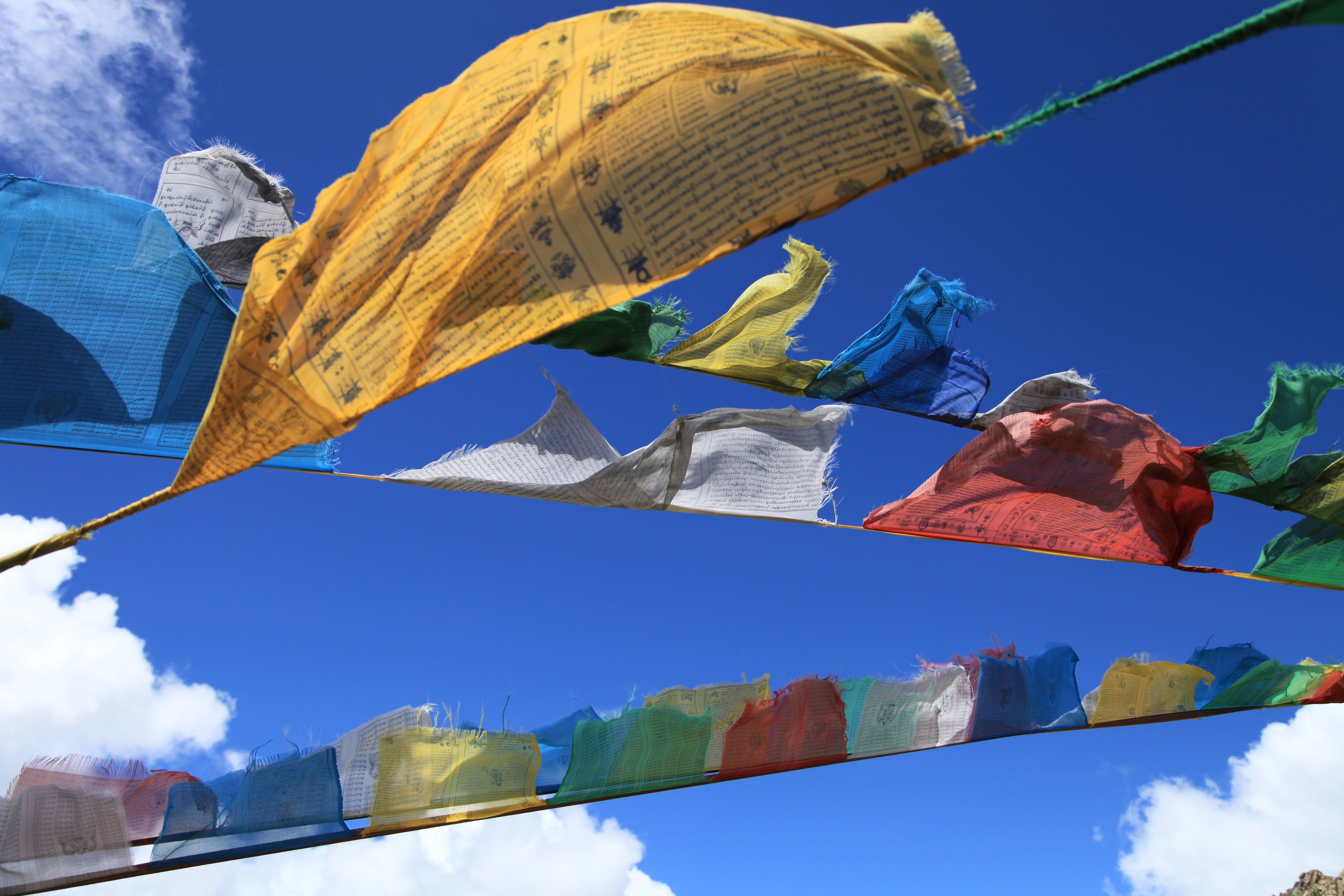 Before crawling in the tent, I looked over my shoulder, trying to get a last glimpse of the face which I felt so strongly that was refused to me. There it was, a looming tower of ice and rock and somehow, the words of Joe Tasker came to mind: “There are always a multitude of reasons on a big mountain for not going on but the most powerful, the one which decides above all others, is the lack of will.” 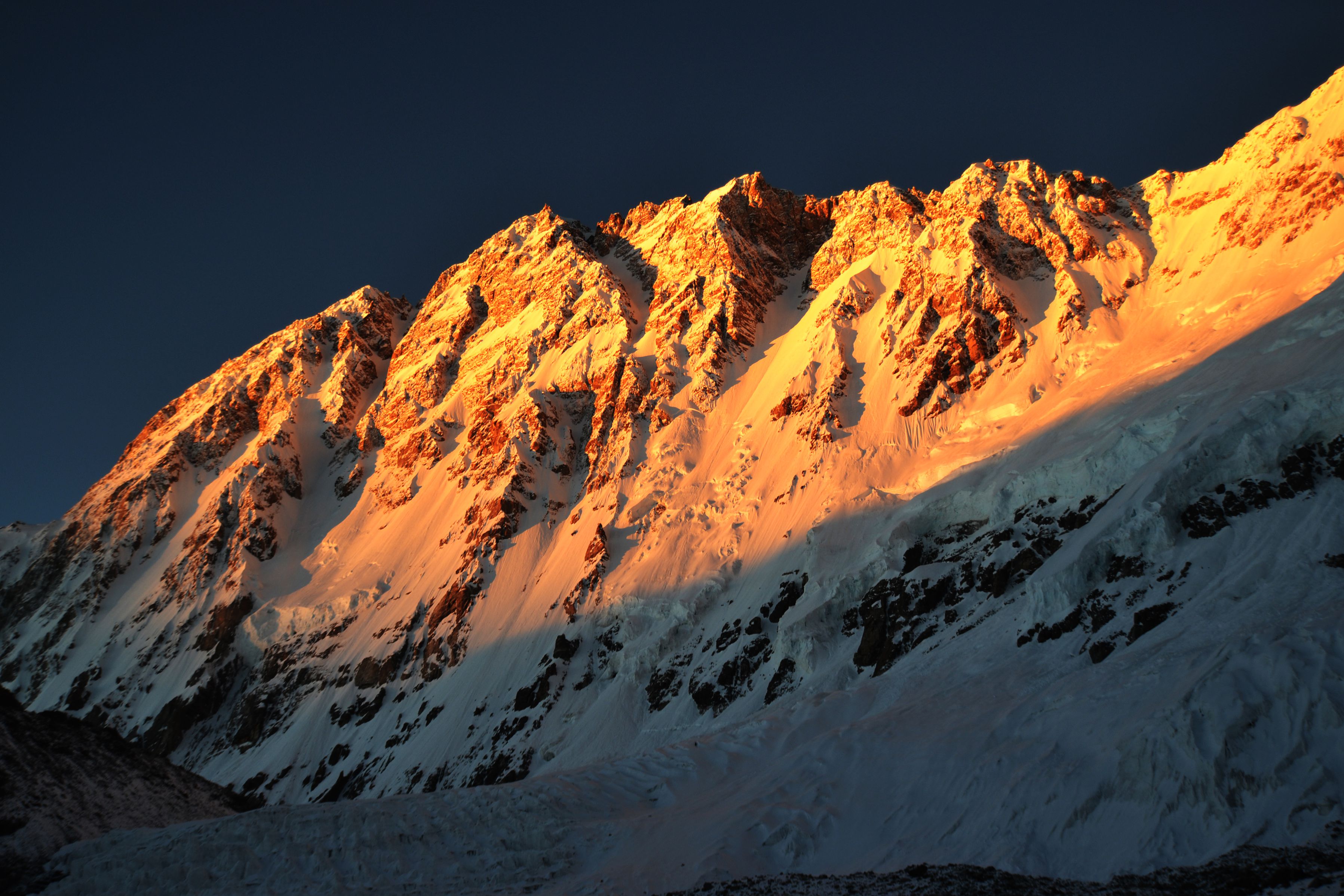 During 2-4 October 2011 Cosmin Andron (Romania), Cristina Pogacean (Romania) and Waiwah Yip (UK/Hong Kong) attempted to climb, alpine style, the South West face of Shishapangma 8027m on a line between the Slovenian route of Stremfelj/Kozjek (1989) and the Korean route of Park/Kang (2002). 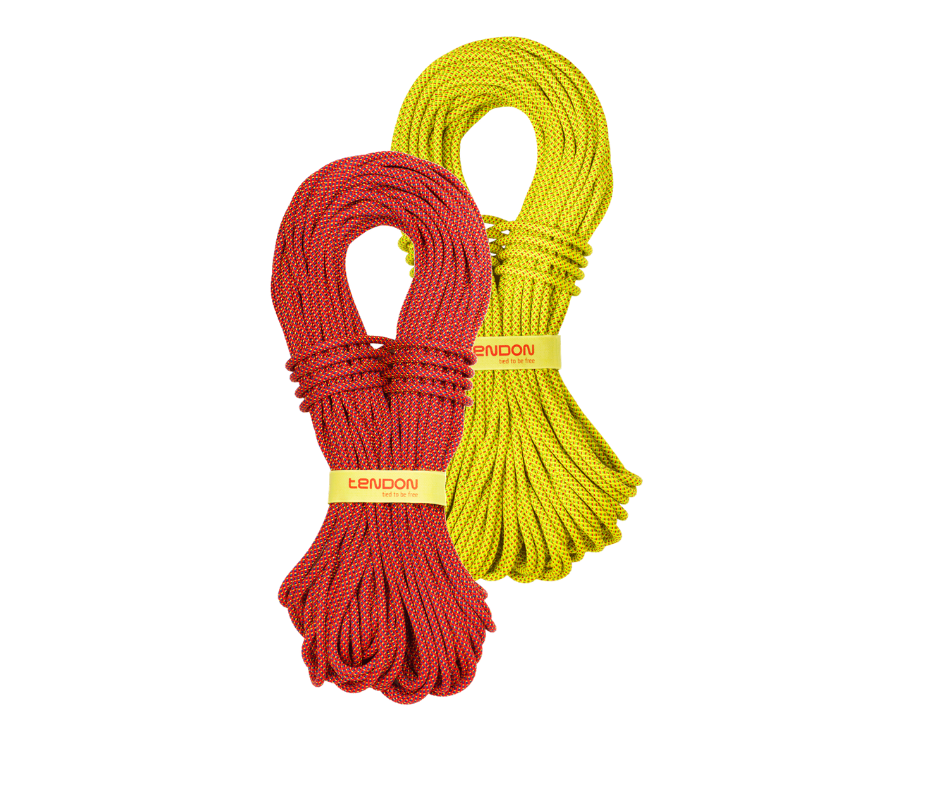 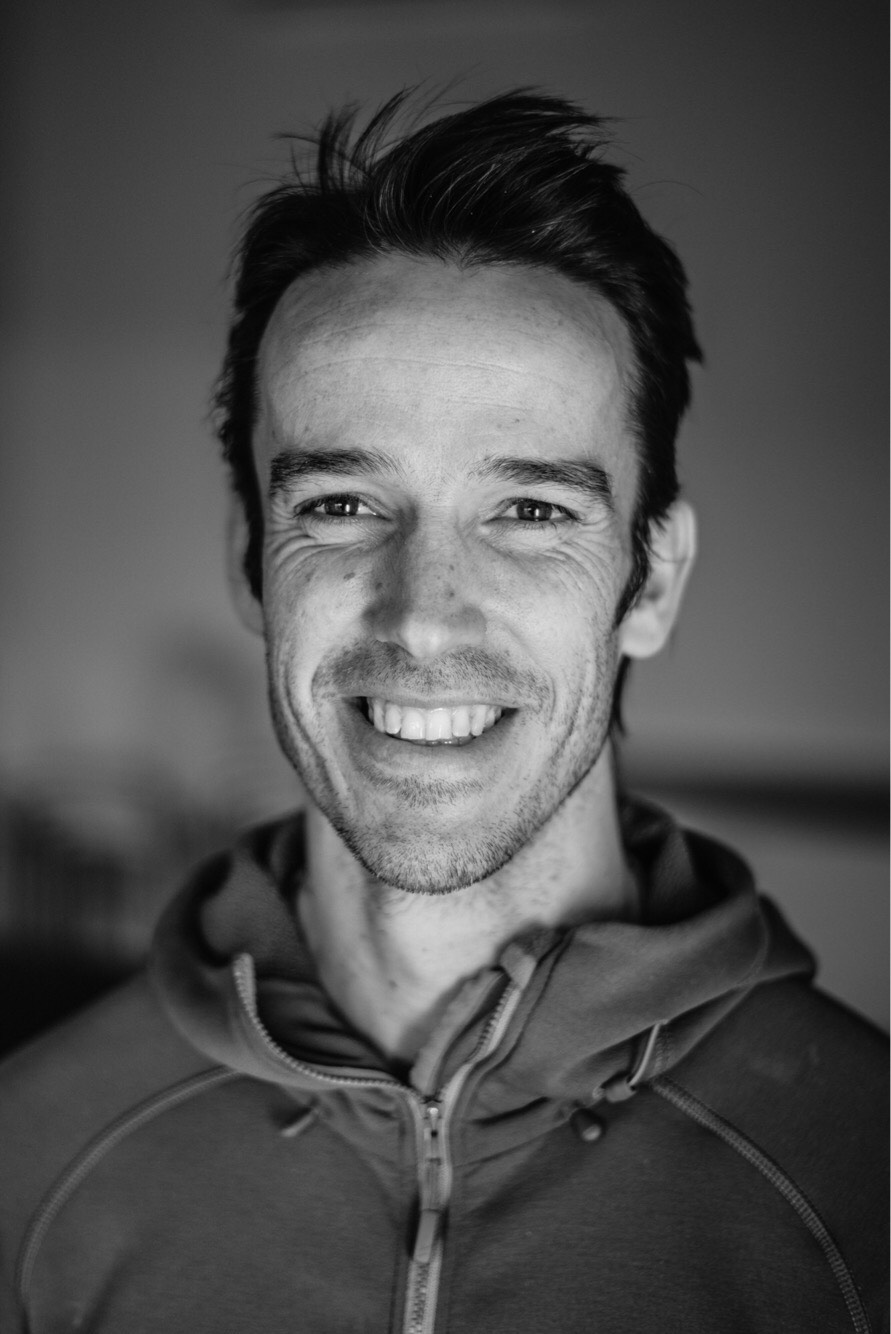 Tom Randall: Climbing in Sheffield has been really dificult Previous 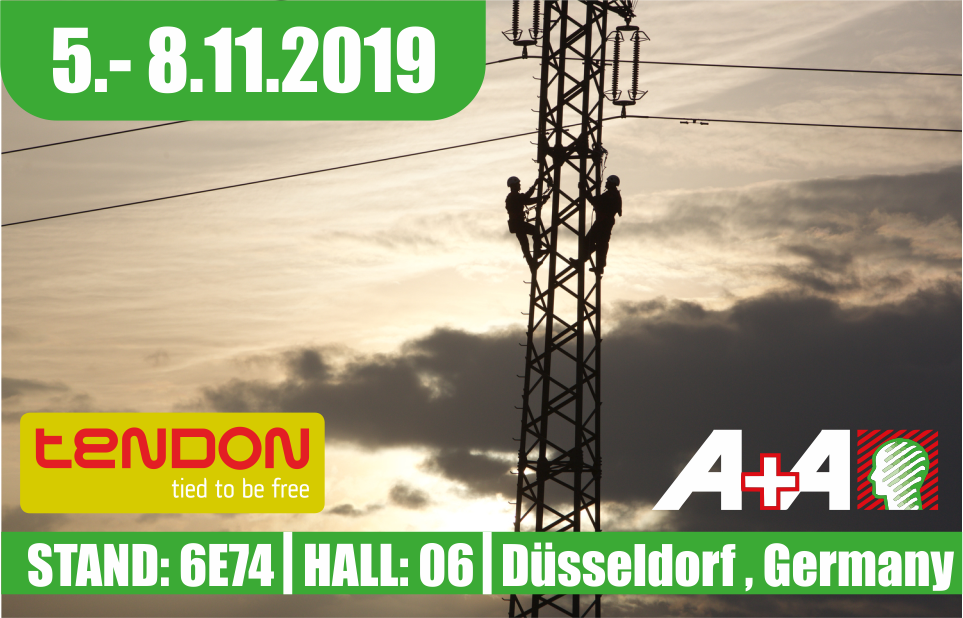