Don't you know the Republic? So when you go to Chamonix from Switzerland from Martigny, the moment the view of the Chamonix needles opens before you, you will see Charmoz. You'll see it. 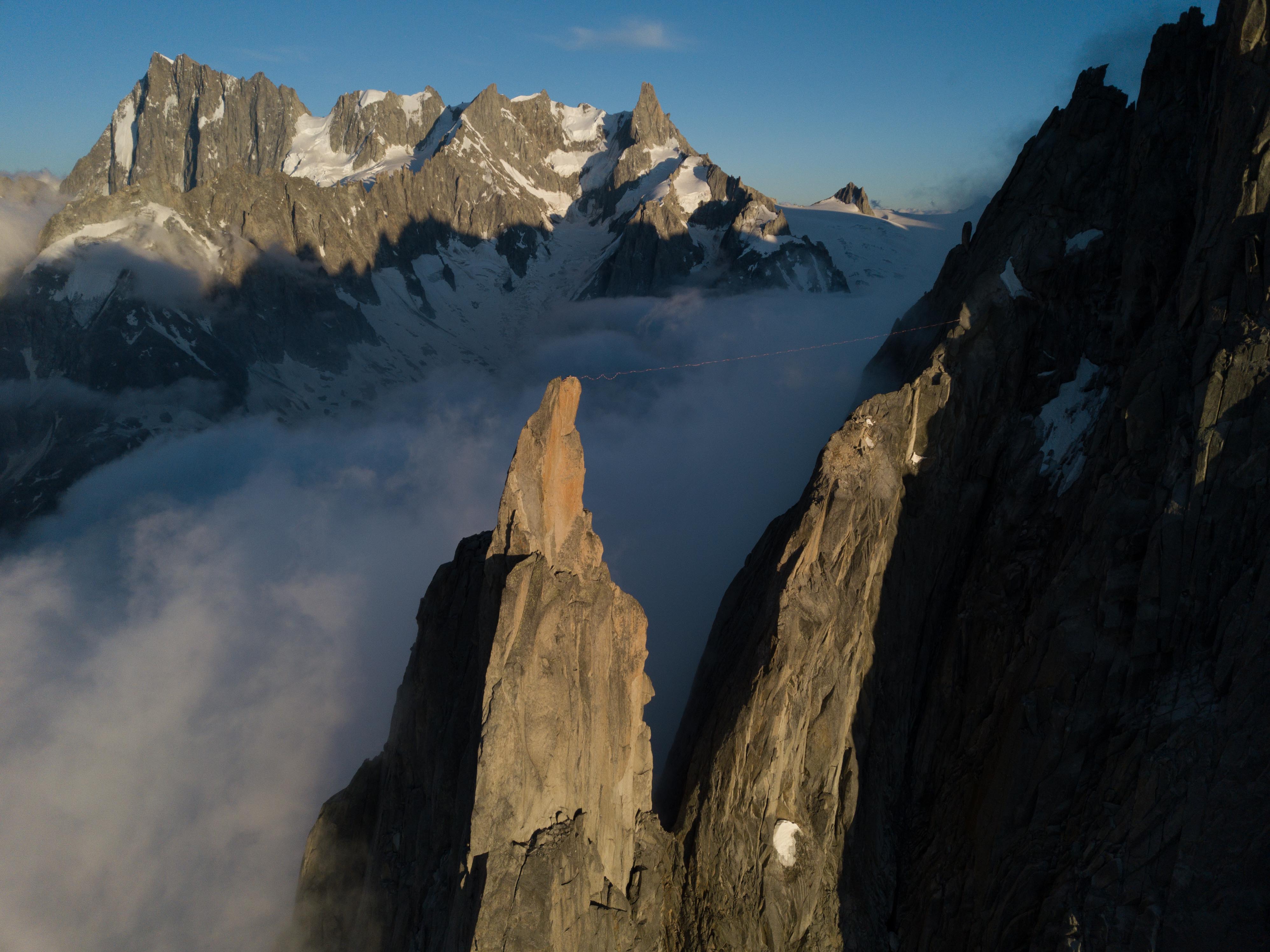 So graceful, slim and challenging. The Republic emerges from the northeastern ridge of Grand Charmoz. It is beautiful, elegant and perfect for the highline. Some 8 years ago, my friends “Flying Frenchies”, mountain line pioneers, have built a 55m line that did not go to the peak by far. At that time, there were no 100m highlines, let alone high on mountain peaks. As time goes by, sport evolves and horizons open. 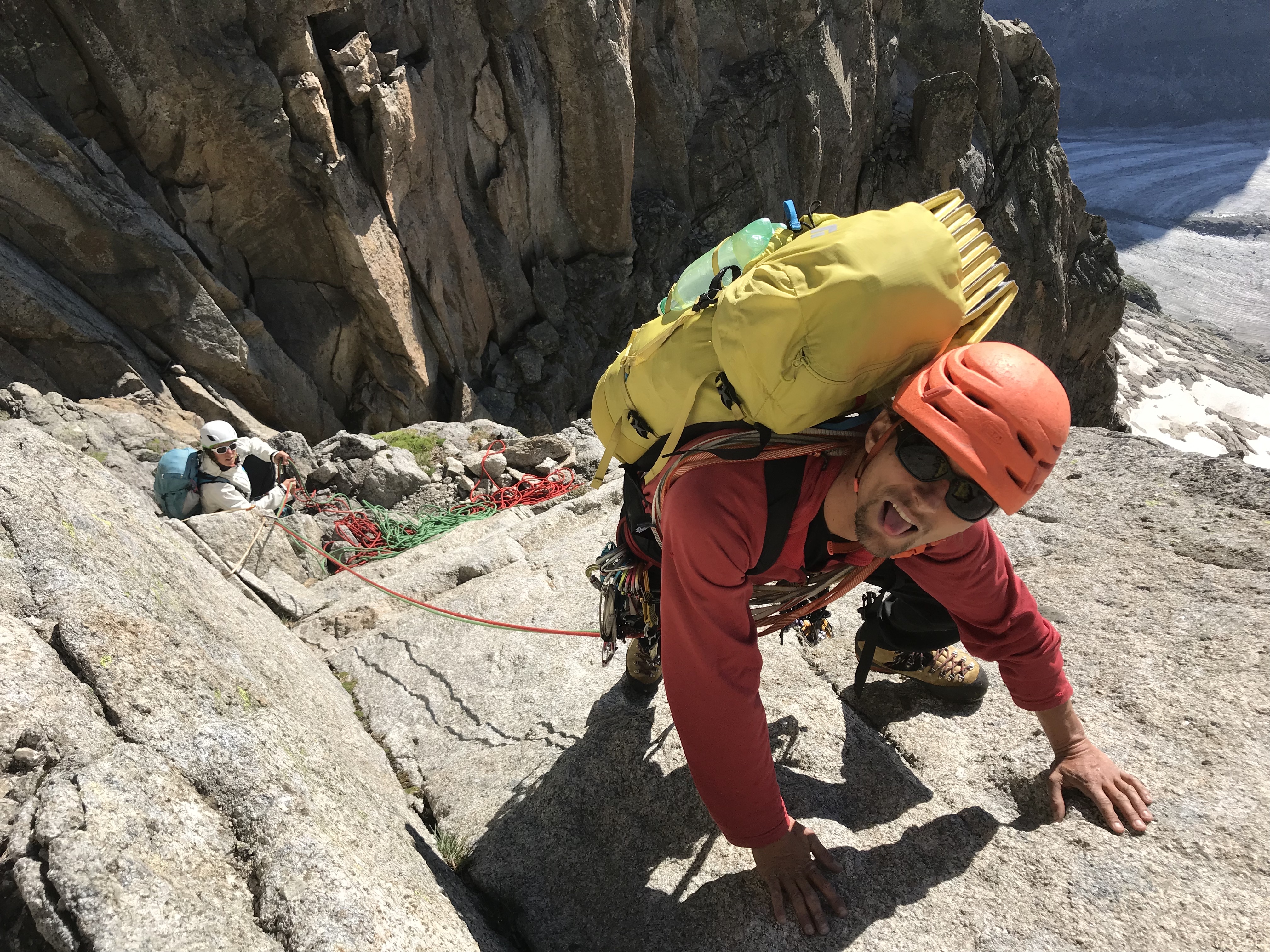 I have had this line in my head for a long time, and suddenly I felt that the time was right. It was time to extend the old line to the top. To be inspired by history and to overcome respectfully past generations and to leave a legacy of the present generation. Just as the climbers have been doing in the walls for decades. It's the first week of July and the amazing weekly window of beautiful stormless weather ends. With the severe heat, regular afternoon summer thunderstorms are coming, and this is a crucial problem for this mission. We need to spend one night in the wall and one on the top, so thunderstorms don't exactly fit. 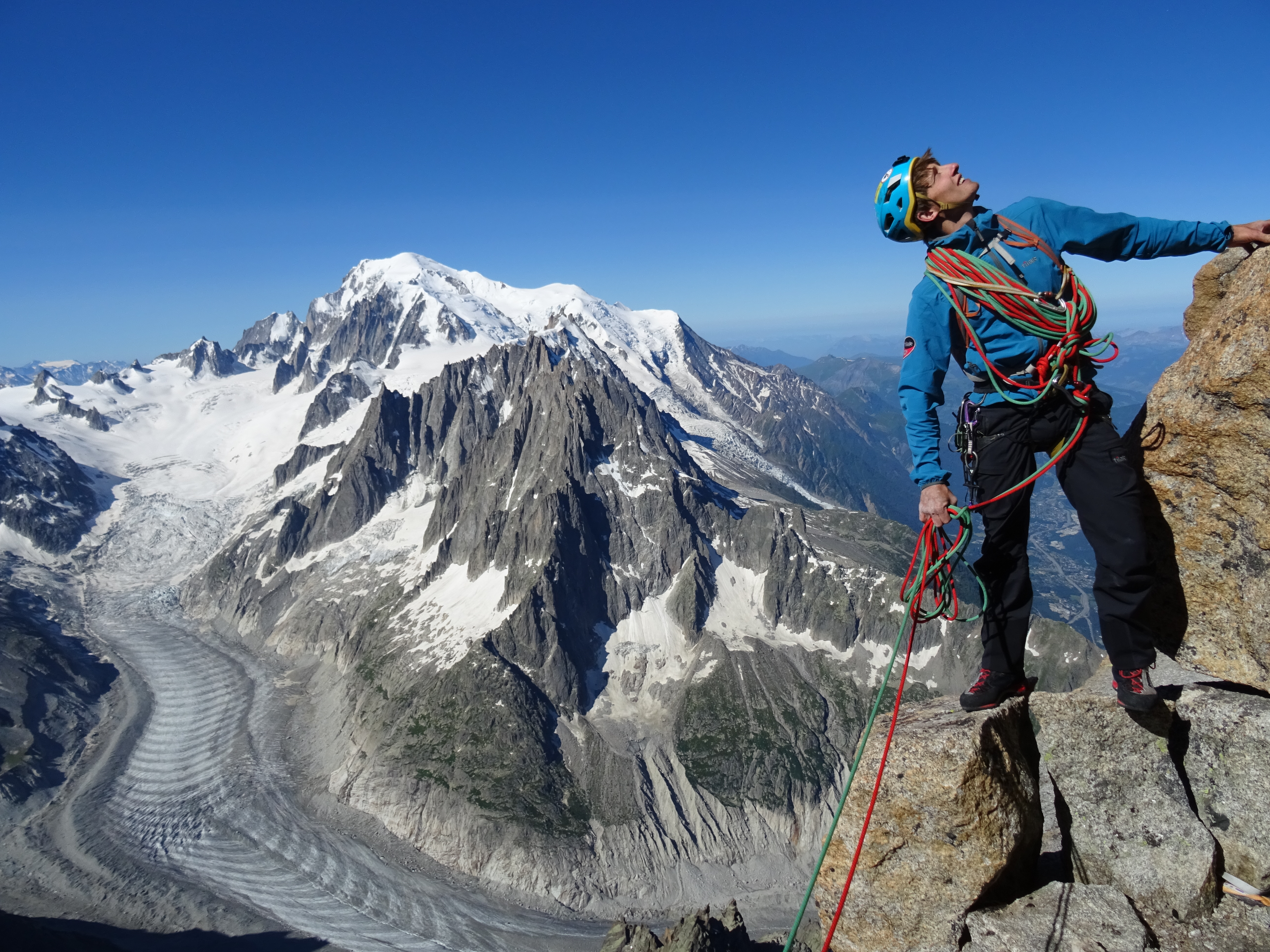 I hypnotized all possible weather forecasts, I went to the mountain guides' house for fresh forecasts every morning, and did so until a two-day stormless window appeared after a few endless days. Now or never. For this project, I found two great soul mates, Chloe Roux-Mollard, a French slackliner and freerider, and her boyfriend Pol. It would be better to be two climbing pairs, but no one else was available. 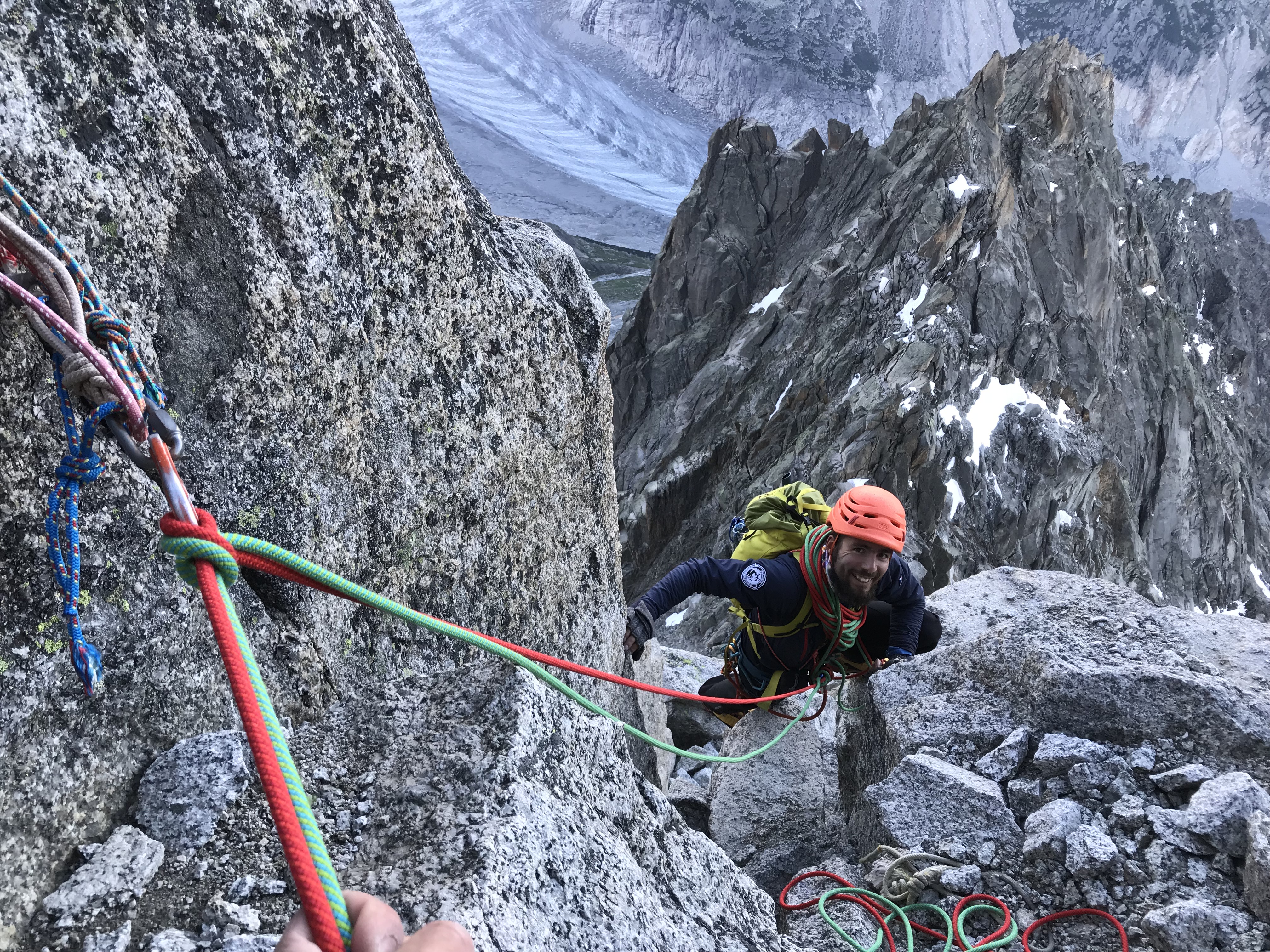 The first day we took a train to Montenvers and went to the Refuge de l'Envers where we spent the whole afternoon waiting for the reported storm to arrive. And as they wrote, it happened. Around 7 pm the storm ended and our two-day window started ticking. That evening we overcame the snow break at the beginning of the normal route (Voie normale - 700m, 5c A0) and climbed the first few pitches to the spacious shelf where we laid down. We climbed on great twins from Tendon, Master 7.8 TeFIX with TeFIX technology, which permanently bonds the sheath to the core. It prevents any slippage between these two basic rope parts. 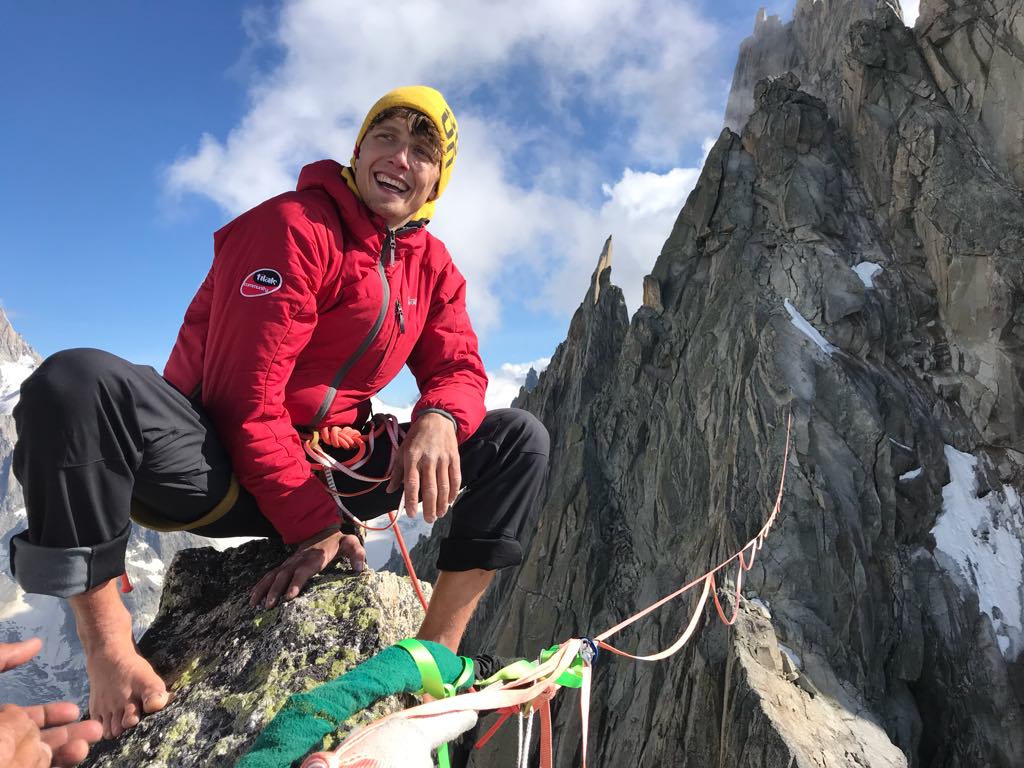 The next morning the wake-up call at 4am, and around 9am we were in the saddle below the Republic. From there I climbed with Pol three pitches to the side of Charmoz, and he then descended back into the saddle and then climbed with Chloe to the Republic. Knock, knock, knock, and so on with a hammer and hand drill for about an hour, until we fitted three rivets to anchor on Charmoz and two on the Republic. Then I took off with the drone to send the line to the other side. After that we pulled a 4mm reep and then the line. At 4pm this 100m long beauty was tight and ready. The gigantic clouds rolling from crest to crest made us enjoy a magical company, but sometimes they hugged us so hard we couldn't see for more than a few metres. 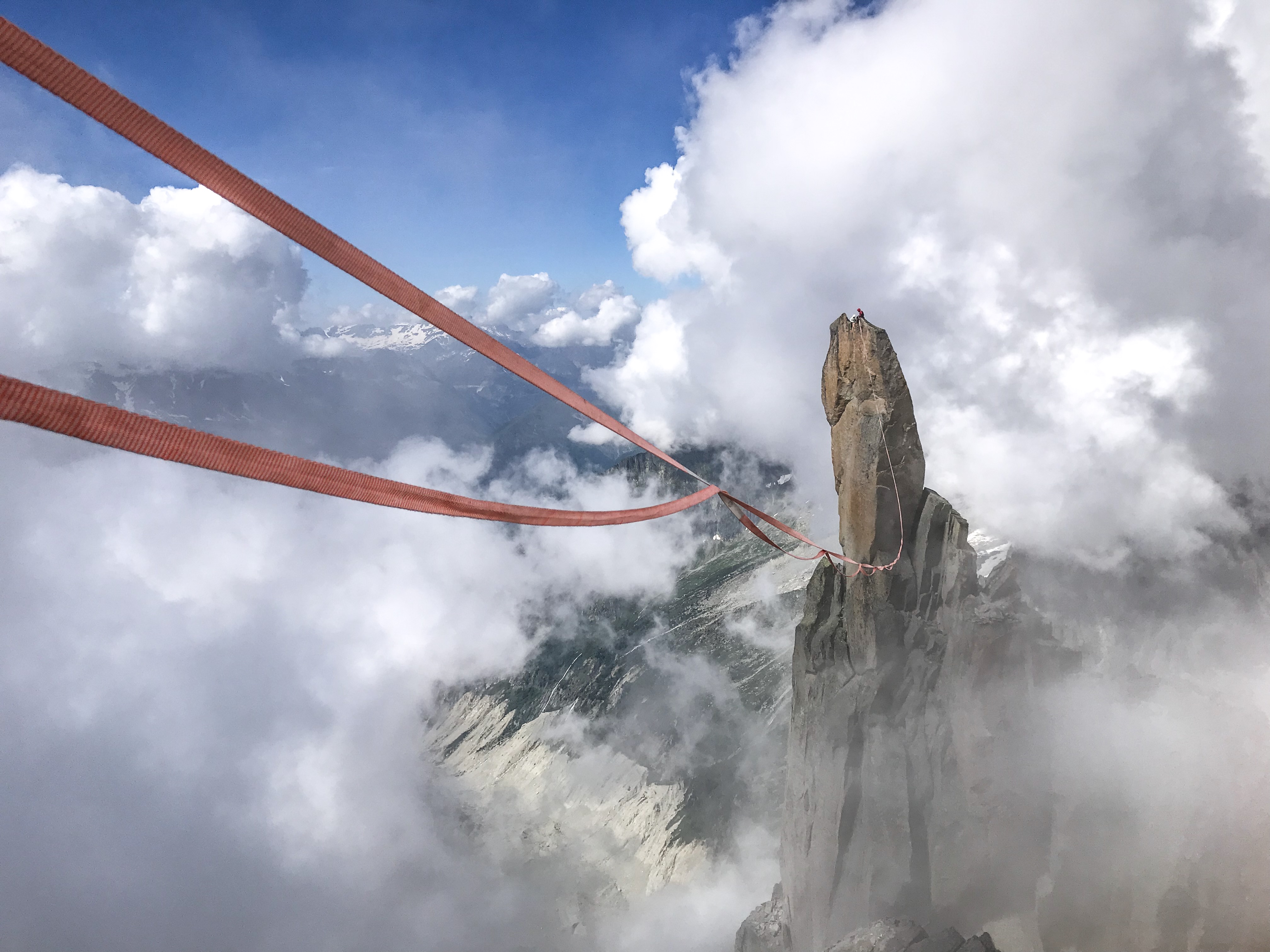 I was so excited waiting for the clouds to spread apart for a moment and create a bright window for me to cross the line. The request was answered. The clouds parted and I was sitting on the string again. I felt so tiny in a sea of clouds, granite and air, and once again I was scared as a little boy. Inhale, exhale, lift, and I was already standing on it. My knees were shaking and the other side seemed a mile away. But I thought that from the logic of things, when I put one foot in front of the other foot, I have to come there someday. And so it was! Some time later I woke up from trance, my heart pounding like a drum, and on the other hand I was tired but extremely happy. 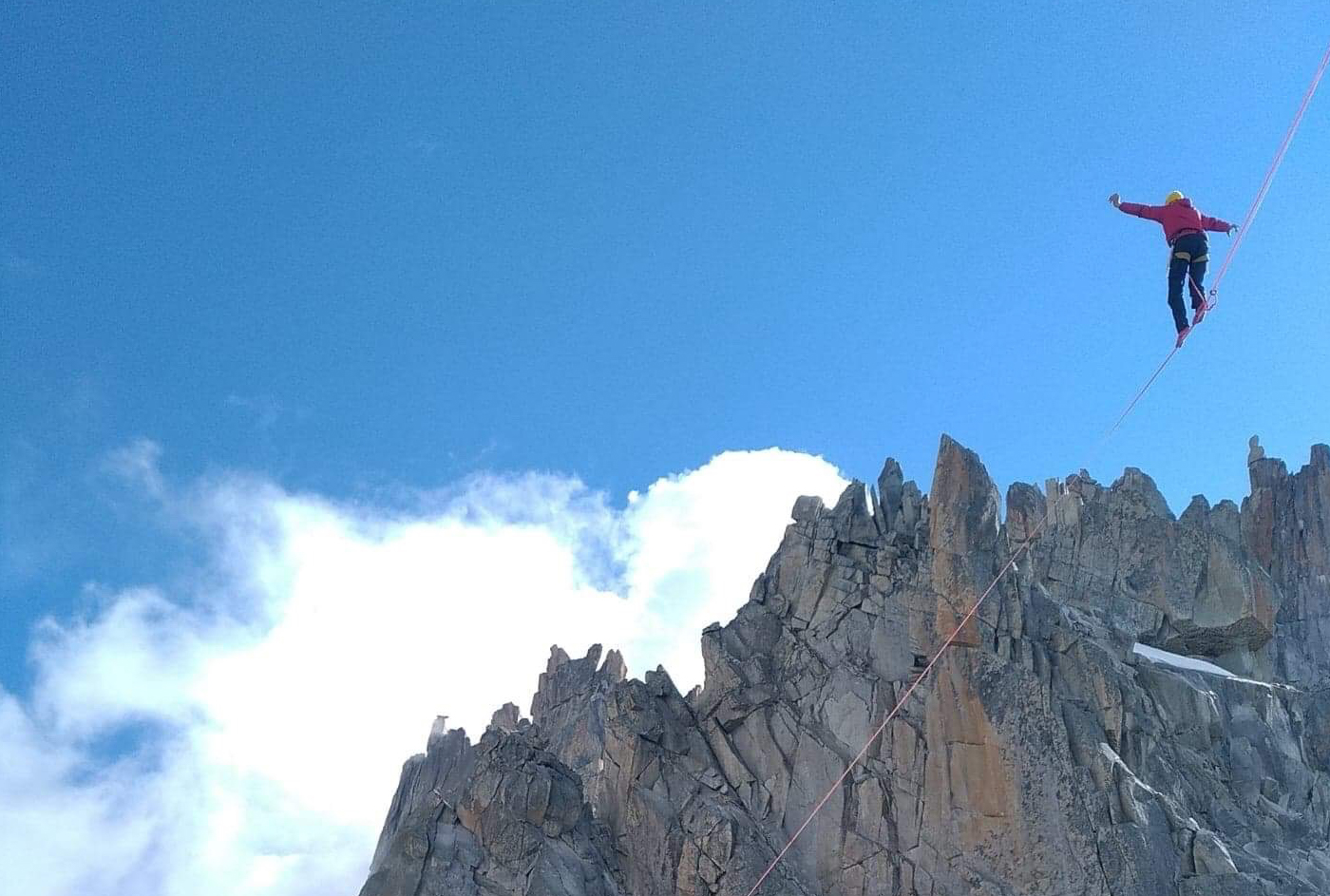 This officially opened the line. Normally I don't sweat much on a 100 metre highline, but this one gave me a hard time. All the drudgery to scramble here with the rack, anchoring by hand, making it tight, and all that in the exposed environment of the high mountains adds difficulty to this line, but mainly beauty and attraction. The line was given the name “Érection celéste”. 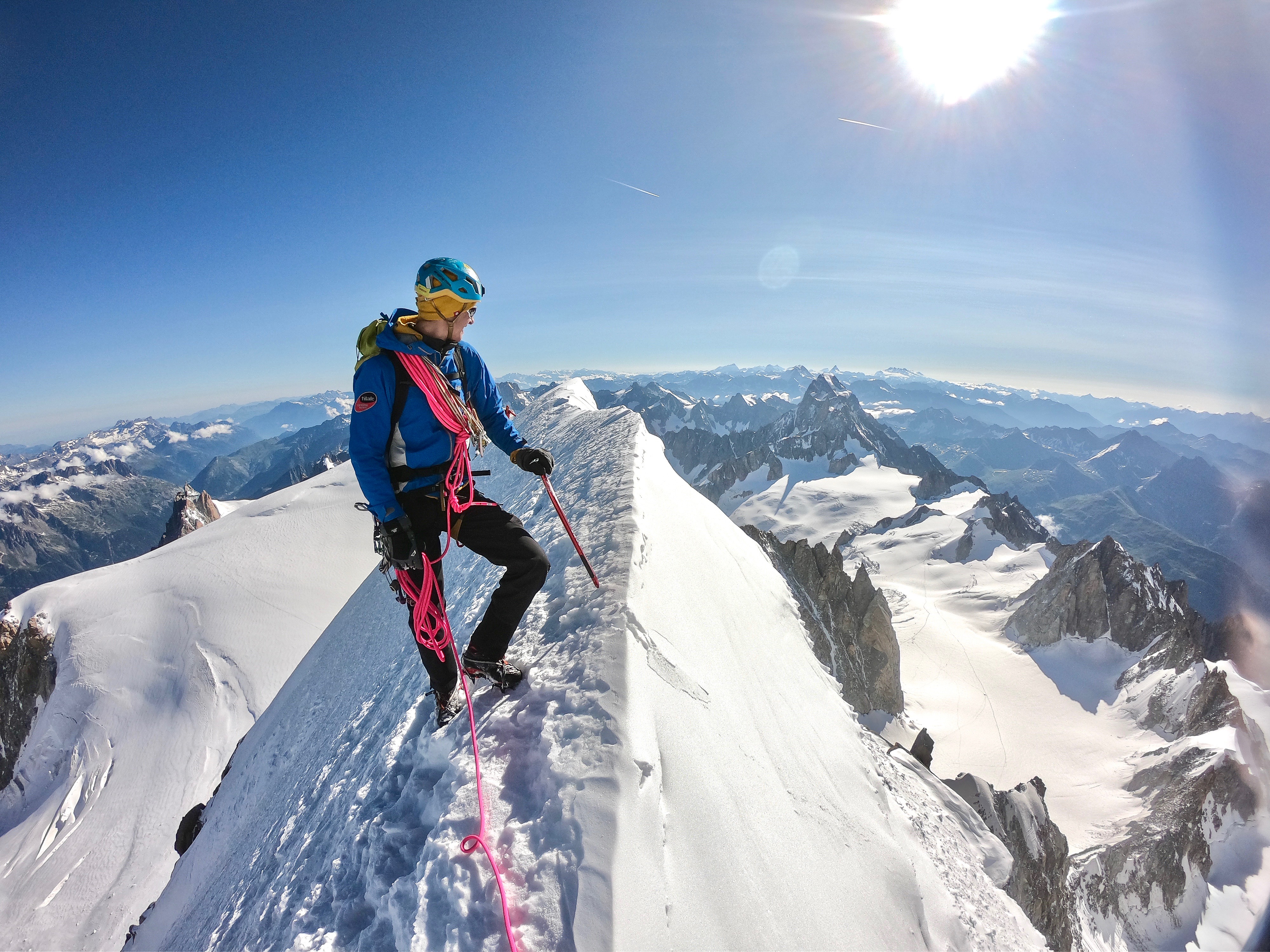 Chloe went to try the line, too, and tried very hard, but she couldn't do more than a few steps. Still, she was absolutely thrilled that we did it together. The sunset was approaching and we, totally hungry, descended from the Republic to the saddle for our things. We climbed back to one of the shelves on the Republic to bivouac, then dinner, bedtime story and deserved sleep. Morning wake-up with the sunrise, then a few pitches back to the peak, and had time to enjoy the line all the time till noon. And then just taking off and a few hours of abseiling and running on the glacier to catch the last train from Montenvers. Tantara … fanfare, end, finish. All is well that ends well, the line is well.

And after proper work, there should be a real reward. The weather rewarded us. A few days of nice weather came, so I was able to send a couple of classic routes in Chamonix, such as Les Drus Traverse and Arete Kuffner.

Only the logged-in user can rate it.
The article was rated 1x. 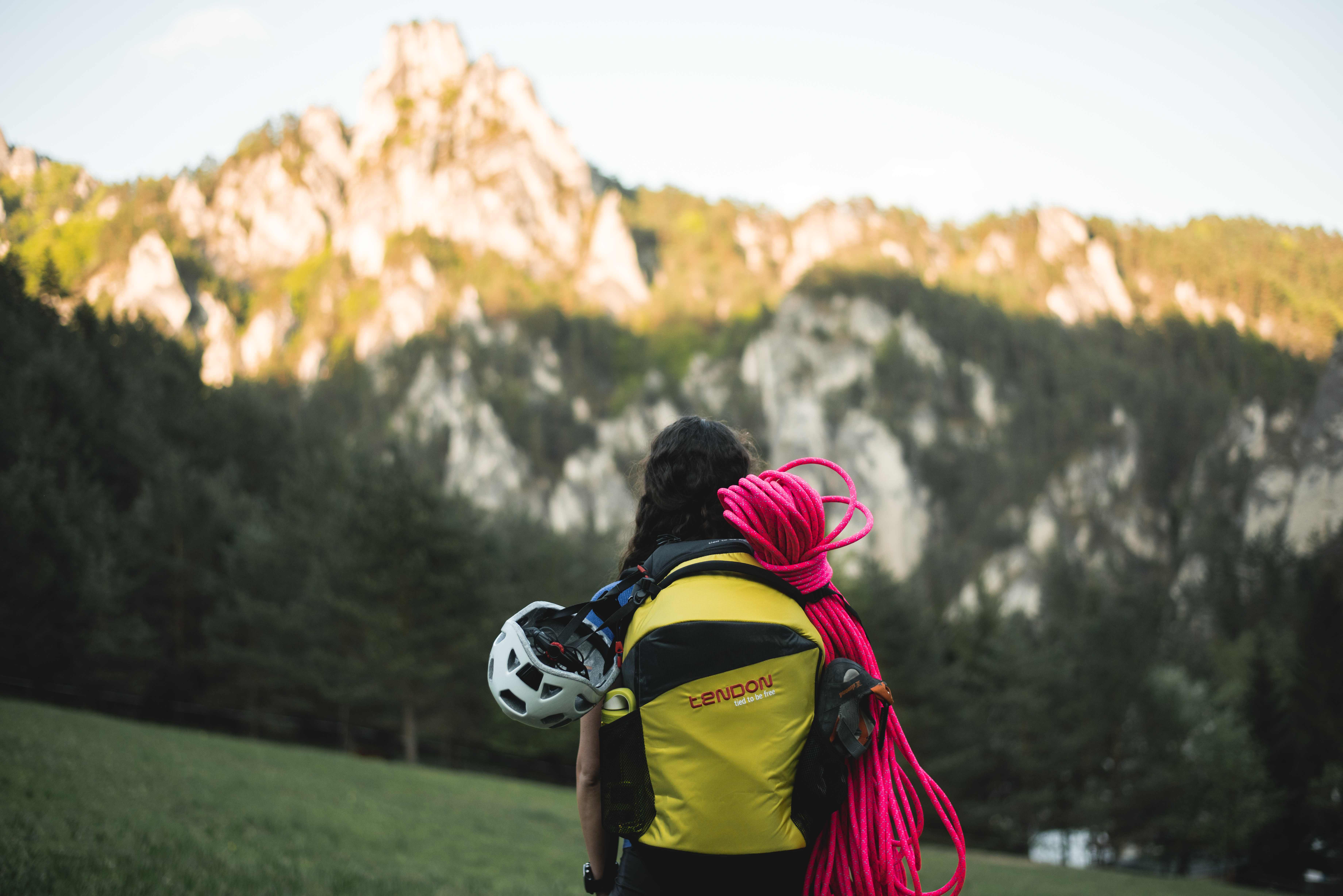 How to carry the rope to rocks or to the gym? TENDON Gear Bag may be the solution! Previous 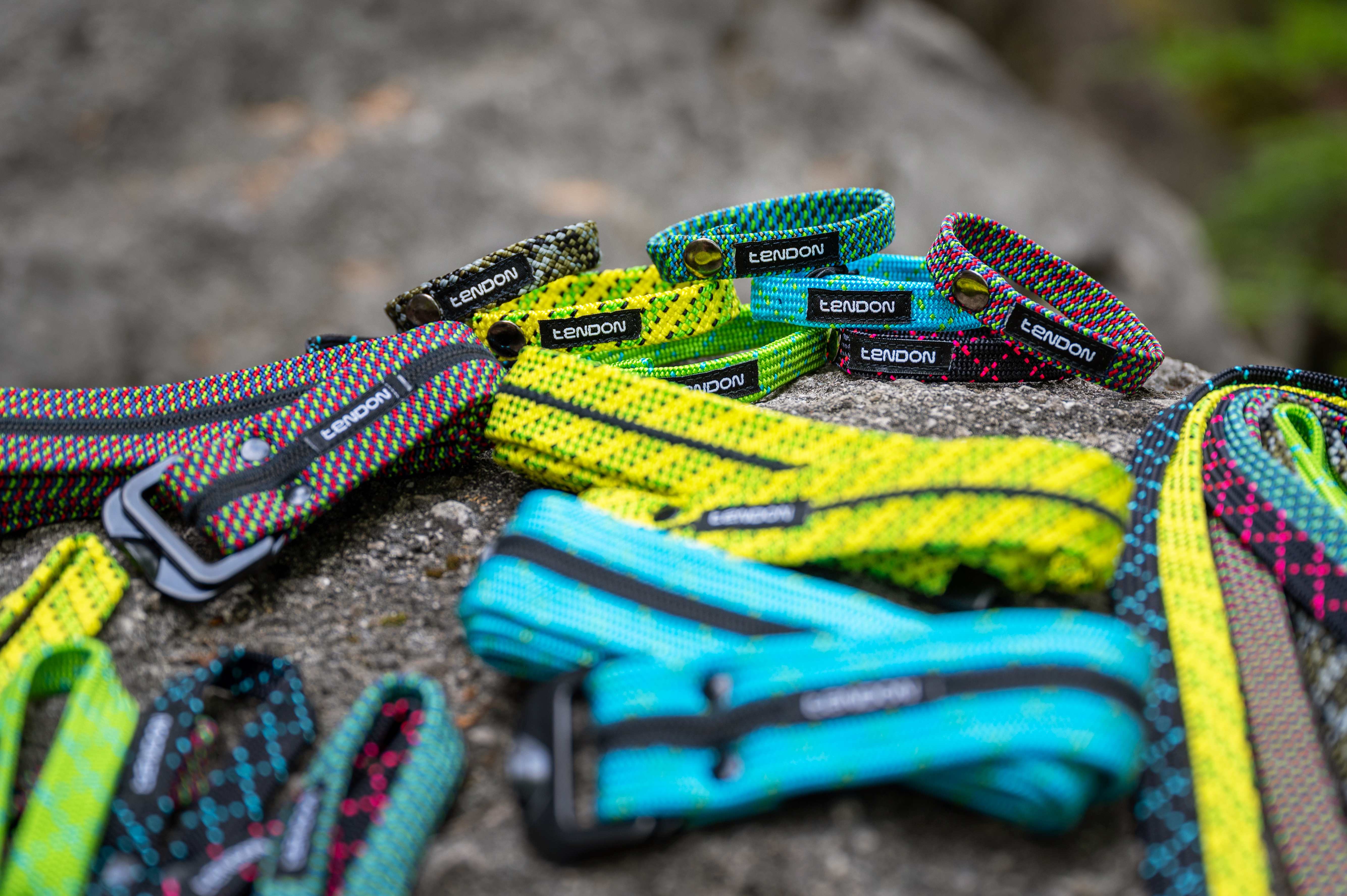